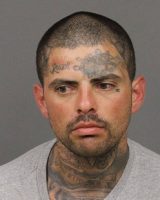 Shortly before 1 a.m., a 911 caller reported a stabbing in the 100 block of South 11th Street in Grover Beach. Officers arrived to find a man suffering from multiple life-threatening stab wounds.

The victim, who has known the suspect for several years, identified Benjamin Robert Sedeno, of Santa Maria, as his attacker. Sedeno, 38, fled the scene before officers arrived.

On Monday evening, Grover Beach detectives located Sedeno and arrested him without incident. Officers booked Sedeno in San Luis Obispo County Jail on charges of assault with a deadly weapon and having an outstanding warrant. Sedeno remains in custody with his bail set at $25,000.