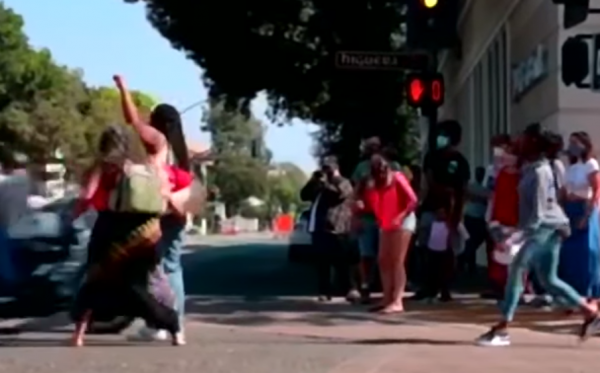 A judge ruled on Wednesday that the motorcyclist who collided with a Black Lives Matter protester in San Luis Obispo last year may not have his criminal case dismissed through a misdemeanor diversion program. [Tribune]

On Sept. 2, 2020, motorcyclist David Medzyk revved his bike and turned left from Los Osos Street into a lane on Higuera Street where protesters Josephine Amarachi and Artemisia Shine were standing outside the crosswalk and demonstrating. After he drove past Amarachi and Shine, Medzyk struck protester LeiYahna Jefferson, who was yelling into a bullhorn at drivers from the crosswalk. Jefferson was not seriously injured, though she told investigators she experienced pain in her arm and leg from the collision.

Following the incident, Medzyk drove to the San Luis Obispo police station and filed a report claiming those in the crosswalk attempted to knock his motorcycle down. Police, however, recommended prosecutors charge Medzyk with one misdemeanor count of reckless driving.

Officers also cited Amarachi and Shine for obstructing traffic. The California Vehicle Code requires pedestrian outside a crosswalk to yield the right-of-way to vehicles so close as to constitute an immediate hazard.

Reckless driving is defined as driving a vehicle with willful or wanton disregard for the safety of others.

Medzyk pleaded not guilty to the charges and requested Judge Hernaldo Baltodano grant him pre-trial misdemeanor diversion, which would ultimately result in prosecutors dismissing the case. The misdemeanor diversion program allows a defendant to complete community service, classes or a restorative justice option instead of risking a criminal conviction and jail time.

A bill signed into law by Gov. Gavin Newsom last September created the diversion program. The law stipulates that all records of the person’s arrest disappear from the defendant’s criminal record following successful completion of the terms.

Medzyk is a veteran, longtime resident of SLO County, has no prior criminal history and is amenable to restitution. But, upon watching the video, the collision appeared intentional, the judge said

In ruling against the diversion program, Baltodano also stated Medzyk used hyperbole or made a false statement to police when he claimed the protesters tried to knock down his motorcycle.

Deputy District Attorney Amy Fitzpatrick said last week she offered a deal to Medzyk in which he would plead no contest to a single count of reckless driving in exchange for a 30-day jail sentence, a fine of $1,150 and 80 hours of community service.

A pretrial conference in the case is scheduled for next month.