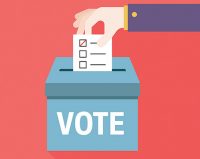 The San Luis Obispo County Board of Supervisors voted 3-2 during a contentious hearing on Tuesday to return to return to pre-pandemic voting procedures with traditional polling stations and distribution of mail-in ballots upon request.

In 2020, all registered voters automatically received mail-in ballots. Voters could also cast ballots at a limited number of voting centers, which remained open over the span of days, rather than just on Election Day.

Following hours of public comment and deliberation, the board of supervisor voted in favor of a return to individual polling places for neighborhood precincts and elections officials only sending voters mail-in ballots upon request. SLO County is expected to have approximately 76 polling places in the next election.

The county is expected to save about $30,000 by not sending mail-in ballots to all voters. The voting system changes could come into play as soon as late this year if a California gubernatorial recall election occurs.