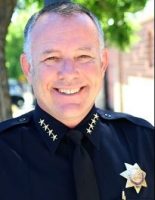 Shortly afterwards, the city received a complaint about the flag from a resident. The individual stated the flag was controversial and divisive and requested it be removed.

In attempt to avoid controversy and preserve public trust, Lewis ordered the thin blue line flag be removed from the light pole, he said.

“I am aware that the symbolism of thin blue line flags is viewed differently by many,” Lewis stated in the police department Facebook post. “Some view it as a symbol of law enforcement support, while others view it as a racist and divisive symbol. I leave it to each community member to research this controversial topic and form their own opinions.”

After police removed the flag, a rumor swirled on social media that a community member had stolen it. The rumor is not true, the police chief said.

“I am solely responsible for the removal of the flag,” Lewis wrote. “Further, there have been many unproductive and negative conversations on social media about this community member that included veiled threats. I humbly request these unproductive accusations and threats stop immediately.”

Such conversations do no promote community trust and have created a distraction for the police department, the chief added.

The police department’s Facebook post containing the message from Lewis has received nearly 1,000 comments in less than 24 hours, with many commenters criticizing the chief for removing a flag display intended to show support for law enforcement. Some commenters thanked Lewis.