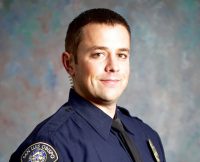 The fatal shooting of a San Luis Obispo police officer on Monday was preceded by the gunman allegedly burglarizing a business for which he previously worked.

Early Monday morning, a burglar broke into the San Luis Obispo indoor rock climbing business The Pad Climbing and stole undisclosed items. Edward Zamora Giron, a former employee of The Pad Climbing, was later determined to be the main suspect, the business announced in a social media post on Tuesday.

Shortly before 5 p.m. Monday, six officers attempted to serve a search warrant at Giron’s apartment on Camellia Court. The search warrant related to a spree of commercial burglaries, according to local law enforcement.

Officers knocked and announced they were there, but Giron, 37, did not open the door. After an extended amount of time, officers broke down the door to find Giron armed and lying in wait. Giron fired at the officers, who returned fire and retreated.

During the shootout, Giron shot and killed Detective Luca Benedetti, 37, and shot and wounded Officer Steve Orozco. Giron died from an apparent self-inflicted gunshot wound and other injuries consistent with being struck by the officers’ return fire.

Inside the apartment, officers found stolen property linking Giron to multiple commercial burglaries. Giron had a record of drug and alcohol offenses, as well as burglaries, but had no violent criminal history.

The Pad Climbing released a statement expressing regret for how the incident unfolded.

“First, we would like to express our deepest gratitude to the SLOPD and extend our hearts to the officers were shot, their families and their colleagues,” The Pad Climbing stated. “We have had the honor of working alongside them through past endeavors and we are grateful for their service to our community.”

“We know it’s their mission to uphold the law, but, for our part, we regret that the relatively small damage done and the things that were taken cost the lives of these brave officers.

“As we learn more about what happened with Eddie, we hope there is something to be learned.

“The Pad Climbing family has always sought to support each other and our community, and we ask for love and empathy for all who are impacted by this tragedy.”

Staffers or community members who would like to speak with a counselor will be able to do so at the San Luis Obispo rock climbing gym.