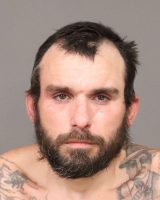 A man who was allegedly driving a stolen vehicle attempted to run away from Morro Bay police officers following a traffic stop Tuesday morning, but was promptly caught and arrested.

Shortly before 9 a.m., an officer conducting traffic enforcement at the intersection of Highway 41 and Main Street noticed the driver of a green Acura was not wearing a seatbelt, according to the Morro Bay Police Department.

The officer tried to stop the vehicle in the 1400 block of Main Street. The driver yielded in a parking lot, where he then exited the vehicle and fled by foot, running southbound into a nearby alley.

Investigators determined Turner had stolen the vehicle in the early morning hours. Officers arrested Turner and booked him in San Luis Obispo County Jail. Turner remains in custody with his bail set at $20,000, according to the SLO County Sheriff’s Office website.

Morro Bay police are thanking alert citizens who provided assistance to officers on the scene during the incident. Police are asking anyone with additional information about the case to contact the police department at (805) 772-6225 or Crime Stoppers at (805) 781-4553.

Police are also reminding residents to secure their car keys and to lock their vehicles.