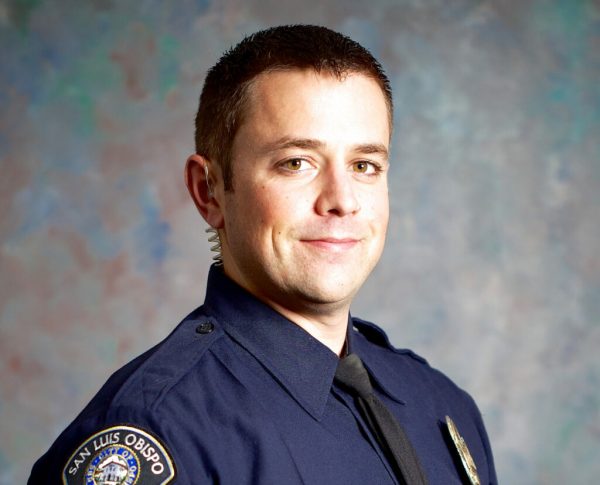 When several thousand police gathered on the Cal Poly campus to honor a murdered San Luis Obispo police officer and university alum, Cal Poly students got a warning to be careful.

The widely shared on social media notice from either ethnic studies Chair Jenell Navarro or her husband, professor Jose Navarro, a member of the department faculty, told students that officers would be in SLO. It’s not clear who authored the email. Neither responded to emailed questions about the notice.

“I have learned that there will be anywhere from 2,000-3,000 police officers on campus in attendance of this service,” the warning to students says. “It is likely they will be downtown or in other spaces in SLO throughout the day.”

The couple has been outspoken on racial justice issues and published “Braided Together: Native and Black Hip Hop Against Police Violence” in thinking about hip hop: blackness, indigeneity, and identity published by Do It Ourselves Press (DIO) in 2019. DIO describes itself as a, “socially-conscious peer reviewed publishing company.” 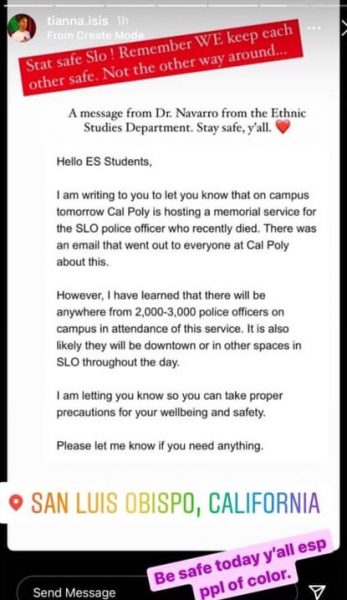 “I am letting you know so you can take proper precautions for your well-being and safety,” the warning adds.

The warning, which BLM leader Tianna Arata shared in an Instagram story, was quickly criticized as inflammatory on social media and by SLO resident David Sparcmann.

“Why on earth would you send out such a horribly bigoted and inflammatory, not to mention inaccurate email?” Sparcman said in an email to Dr. Jenell Navarro. “Are you intentionally trying to trigger unrest on campus and in our local community? Or is your email simply an exercise to inculcate young minds into fearing and hating law enforcement?

“Either way your reckless actions are reprehensible,” Sparcman added. “You require serious discipline.”

Cal Poly declined to comment about the post other than to say the university supports free speech and recognizing the death of an alum.

“As a state institution, Cal Poly supports the right of all its campus community members and visitors to express their individual opinions, regardless of their positions,” Matt Lazier, Cal Poly media relations director, said. “Cal Poly was honored to support a service to recognize and memorialize an individual, and Cal Poly alum, who lost his life while serving San Luis Obispo.”