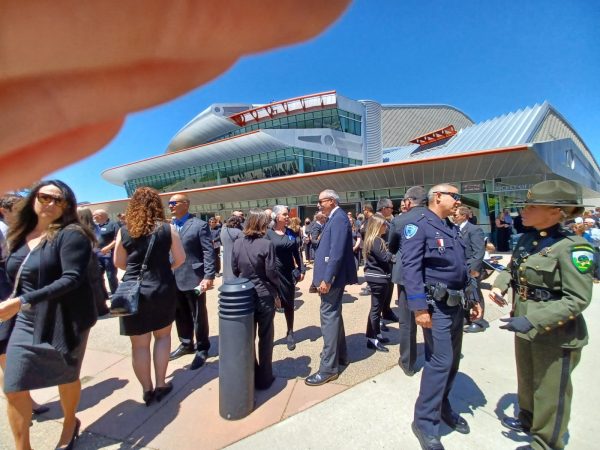 “Luca was an amazing example of the best we have to offer,” Scott said. “He was courageous, he was compassionate, he was friendly, honorable and he was kind. He was the one you wanted covering your six or just over at your family barbecue.”

Sgt. Caleb Kemp, who served with Benedetti both on the San Luis Obispo force and on the regional SWAT team, remembered the detective as an officer who did everything for everybody, as well as a family man who loved his Italian heritage. 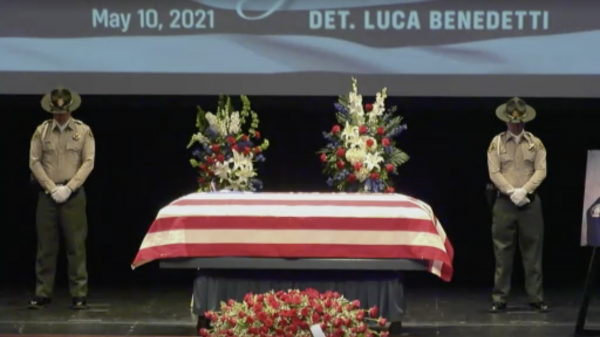 “You need to know Luca is not just a tragic story, not just an incredible officer, but he was an incredible man — a man who loved his family, his wife, his two daughters and his two dogs,” Kemp said.

Following the public memorial at Cal Poly, a procession of first responders made its way off the university campus and onto northbound Highway 101, bringing Benedetti’s body to Paso Robles Cemetery. Onlookers waved flags in support of police along the procession route, including on Highway 101 overpasses.

A graveside funeral service took place at the cemetery.

Benedetti, 37, died in a shootout on May 10 with a reportedly mentally ill man whom officers attempted to serve with a search warrant. Detective Steve Orozco was wounded in the shooting.

Benedetti had served as a San Luis Obispo police officer since 2012 and was a member of the SLO Regional SWAT team. He began his law enforcement career in 2008 with the Atascadero Police Department.

A GoFundMe launched to aid Benedetti’s wife and two daughters has raised more than $600,000, as of Friday morning.