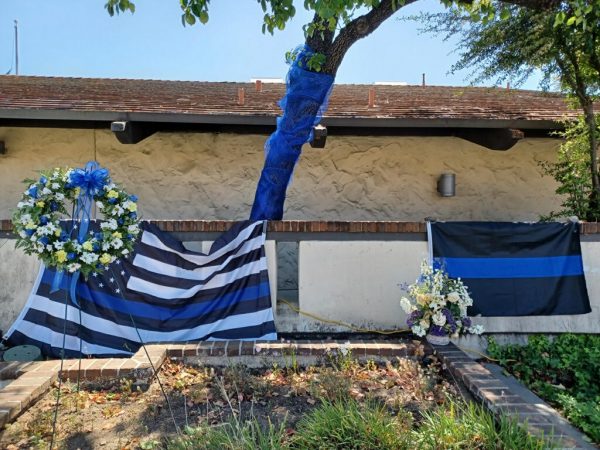 Following the murder of 37-year-old detective Luca Benedetti, who was shot and killed while serving a warrant, the San Luis Obispo Police Department memorialized the officer by hanging two blue line flags in front of headquarters.

“The flag with the blue line is not a sign of community support for police,” Glysson posted on Facebook. “It is a racist symbol. It was popularized at the same time and in direct response to the Black Lives Matter movement.”

At the center of the conflict is the blue line flag, to some a sign of support for law enforcement and to others a symbol of hate.

The issue arose after some BLM protesters, who marched in opposition to racism in policing, labeled all officers as racist based on their profession. Law enforcement supporters countered the protesters by tying blue ribbons on trees and waving blue line flags.

The discourse over the flag’s meaning has played out across the county following a series of protests in which BLM supporters repeatedly stopped traffic and yelled at people dining in restaurants.

Earlier this month, a thin blue line flag placed outside the Paso Robles Public Safety Center sparked controversy in the North County city, leading to the police chief ordering the flag be taken down.

Supporters of the blue line flag, like the Flags of Valor group, say it has long been used to support law enforcement.

“The phrase, ‘thin blue line,’ was initially mentioned in a 1911 poem by Nels Dickmann Anderson,” according to Flags of Valor. “In the 1950s, the blue line was adopted by law enforcement professionals to represent their courage and sacrifice while protecting the American people.”

Glysson, on the other side of the debate, believes the flag is a destructive symbol that disparages people of color.

“I can’t even imagine what a person of color must feel when they drive by a police station displaying this flag,” Glysson posted on Facebook.”Even if unintended, it tells a person of color their struggle is not important.”