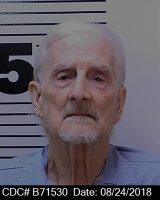 A San Luis Obispo County man who murdered a woman and her three children in Nipomo in 1986, and had been on death row since the following year, died on Memorial Day.

Correctional officers found Richard Allen Benson, 74, unresponsive in his cell at San Quentin Sate Prison at 5:27 a.m. Monday. Officers entered the cell, performed CPR and called for an ambulance. At 6:03 a.m., a paramedic pronounced Benson dead, according to the state Department of Corrections and Rehabilitation.

Benson did not have a cellmate, and foul play is not suspected. The Marin County coroner will determine Benson’s cause of death.