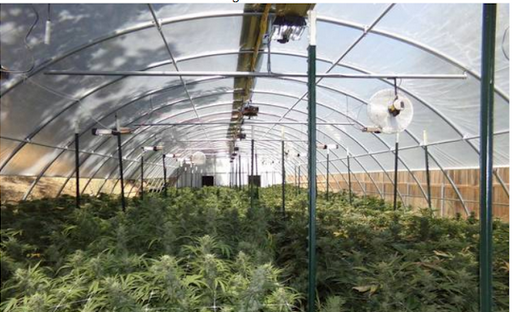 Editor’s Note: This is the first in a two-part series about allegations of theft, illegal cannabis cultivation, impersonation and fraud.

What should you not do when attempting to sell a property in rural Paso Robles for top dollar? Tell prospective buyers that the property included a cannabis grow operation when the grow was illegal and in a greenhouse that an Atascadero man says was stolen.

In an apparent attempt to raise buyer interest and get a high sales price for a property in the Running Deer Ranch neighborhood at Lake Nacimiento, Daniel and Ariel David posted photos on Craigslist of cannabis plants growing in a greenhouse on the property. Their real estate agent noted the cannabis grow was legal in the property description.

But the grow was not legal, according to county records, and an Atascadero man contends Daniel David stole the greenhouse from him.

In early 2018, Adam Macari rented land on Chimney Rock Road from Daniel David for $3,000 a month, Macari said. While he worked on permitting his planned cannabis grow, Macari spent almost $200,000 on a greenhouse, lighting and cultivation equipment, using money he received from a settlement after he was seriously injured in a car crash.

But before he was able to start growing, in late 2017 Daniel David ordered him to leave the property and then fired one round from a Ruger Mini-30 rifle, Macari said.

Daniel David admits to throwing Macari and his partner Ryan Smith off the property, but not to firing a gun at them. Daniel David claims that after he discovered Smith and Macari were illegally growing pot, he ordered them to leave.

“I am a skilled Air Force trained killer,” Daniel David said. “If I had shot, he would have died.”

As for the greenhouse, David said Macari and Smith abandoned it, so now it is his.

Macari called the SLO County Sheriff’s Office to report the theft, but was told it was a civil matter, he said. He then attempted to go through the courts, but soon ran out of money.

After taking pictures of the marijuana plants in the greenhouse, the Davids retained a real estate agent to sell the property. They listed the property for more than a million dollars. The $1,197,000 asking price appears to factor in cannabis grow possibilities for a buyer.

The property includes a three-bedroom house, the greenhouse, a shed and storage buildings on 10.1 acres.

In a Cragslist post, the Davids claim the property previously sold for $850,000. But, the Davids wrote, the buyer “became disabled and foreclosed.” County records, however, dispute that claim and call into question if the Davids even have any legal right to rent or sell the property.