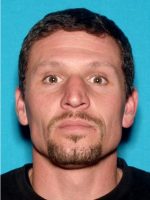 San Luis Obispo County Sheriff’s deputies have searching unsuccessfully for weeks for a man suspected of molesting children and are now appealing to the public for help finding the suspect.

David Paul Wilson, who last lived in San Luis Obispo, allegedly abused children over a span of several years, according to the SLO County Sheriff’s Office. Sheriff’s officials are refraining from disclosing locations where the incidents occurred, saying they need to protect the victims and their families.

Witnesses describe Wilson, 38, as a man who repeatedly finds relationships with single mothers in order to prey on the children, according to the sheriff’s office.

Sheriff’s Special Victims Unit detectives began investigating Wilson in February after receiving a report of a sexual assault on a juvenile. During the investigation, detectives identified and contacted more juvenile victims. Investigators believe there may be additional victims who have not spoken with law enforcement.

Wilson has a history of living in San Luis Obispo, the Five Cities area, Nipomo, Santa Maria and San Jose. Sometimes he is a transient, according to the sheriff’s office. Wilson has relatives in Southern SLO County and Northern Santa Barbara County.

Investigators are asking anyone who has information about Wilson’s whereabouts to contact the sheriff’s office at (805) 781-4550.