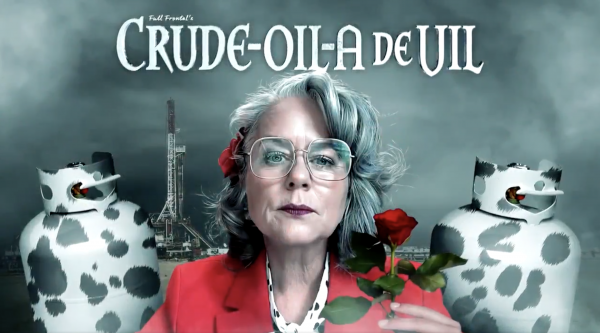 San Luis Obispo Mayor Heidi Harmon made a national television appearance last week in which she spoke out against the gas industry for allegedly targeting her with intimidation tactics and purportedly threatening to kill local residents.

Harmon appeared on the TBS talk show and satirical news program, “Full Frontal with Samatha Bee.” Harmon’s appearance came in a segment called, “Here’s Why Your Gas Stove Is Killing You.” The segment criticized gas stoves and promoted electric stoves as a safer and more environmentally friendly alternative.

In the segment, Harmon recounts how gas industry representatives responded last year to the San Luis Obispo City Council attempting to phase out gas appliances in buildings citywide. A union president used profanity to describe her and called for having Harmon voted off the council, Harmon said.

“I’m Mayor Heidi Harmon, and I was targeted by the gas industry,” Harmon says in the television segment.

“The intimidation tactics were at an all-time low,” Harmon goes on to say. “They threatened to come to a council meeting during the pandemic, and so to see someone actually write in a letter that they were going to busload in people that are potentially COVID-positive to intentionally infect, and therefore potentially kill, members of our community, they stopped at nothing.”

In June 2020, the San Luis Obispo City Council adopted an energy policy requiring all-electric new buildings, an effort Harmon spearheaded. At that time, Harmon sat on the Central Coast Community Energy Board of Directors, the electric energy company she was promoting.

Over months leading up to the vote, gas industry representatives lobbied against the policy, including by sending a letter in March 2020 threatening to bus hundreds of people into SLO to oppose the gas ban and potentially add to the pandemic. The email was sent a few days prior to the issuance of the initial coronavirus stay-at-home order in California.

Following the airing of the television segment, Harmon tweeted that SLO does not allow bullies to make policy.

“In San Luis Obispo, we don’t let bullies make policy. We created a policy of fossil fuel-free homes — the gas union threatened to bus in 100s of potentially Covid positive folks to infect our town,” Harmon stated in the tweet.