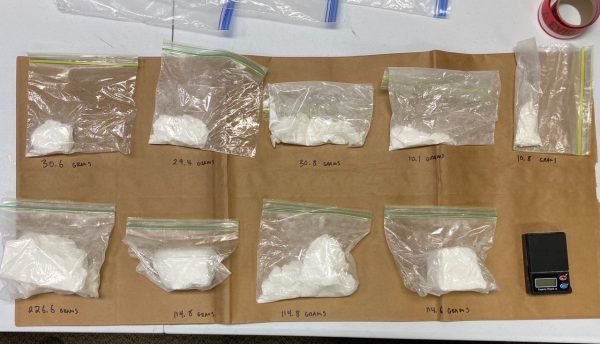 Local and federal officers arrested a San Miguel man after allegedly finding $30,000 worth of cocaine inside his home Monday evening.

At about 6:30 p.m., members of the San Luis Obispo County Sheriff’s Special Operations Unit, county probation officers and Homeland Security Investigations agents served a search warrant at a home in the 300 block of 10th Street in San Miguel. During the search, they found a large sweatshirt wrapped around a clear plastic bag containing a large amount of cocaine, according to the sheriff’s office.

The cocaine was in the closet of a back bedroom. It appeared to be in large chunks, which suggests it had been cut directly from a kilogram or brick, which is associated with large-scale dealers, deputies said.

Detectives seized about 1.5 pounds of cocaine with an estimated value of $30,000. Deputies arrested Ramiro Alcazar-Barajas, 42, on a charge of possessing a narcotic controlled substance for sale and booked him in the San Luis Obispo County Jail.

Alcazar-Barajas is not currently in custody, according to the sheriff’s office website.