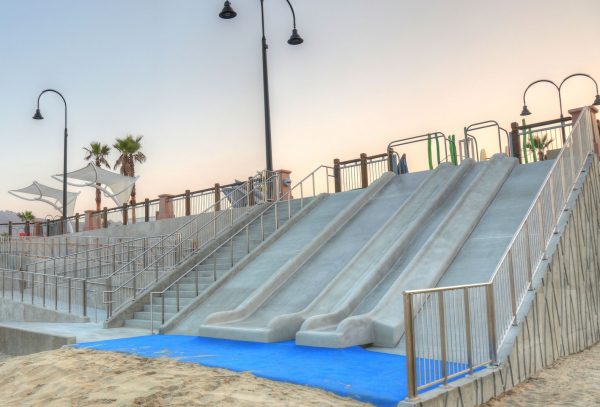 A pair of women are suing the city of Pismo Beach, as well as architectural and construction companies, over spinal injuries they allegedly suffered last year from using allegedly poorly built and designed slides. [Tribune]

Last year, the city of Pismo Beach opened two concrete slides for public use. The slides lead down from Pier Plaza to the beach.

Tara Rodman and Karlee Hayden used the slides in Sept. and Oct. 2020 respectively. The slides propelled each of the women in a way they injured themselves upon landing, they claim. The women landed on their buttocks and their lower backs on the concrete landing area of slide.

On June 3, Nipomo attorney Jacqueline Frederick filed separate lawsuits on behalf of Rodman and Hayden. The suits name the city of Pismo Beach, RRM Design, and construction and concrete companies.

The plaintiff suffered severe and persistent injuries, including to her lower spine and tailbone area, one of the lawsuits alleges. The woman appeared to suffer damaged nerves, which required medical care. She has also endured radiating pain, according to the suit.

People who suffer these types of injuries often have lifelong pain, Frederick said.

Frederick is in the early stages of investigating the specific defects in the design and construction of the slides, she said. Still, the designers did not take into consideration that people of different sizes would use the slides, and adults would face a risk of landing hard onto concrete on their tailbones, the attorney alleges.

The city acknowledged a safety risk by installing warning signs around the slides. The signs warn the slides are designed for kids ages 5 to 12; individuals should use the slides at their own risk; and falls could result in serious injury.

Both plaintiffs are seeking unspecified damages, including for medical bills and lost wages.