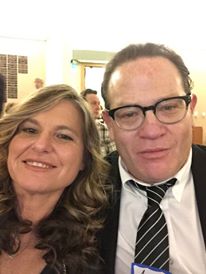 Almost a year after former supervisor Adam Hill died from a reported suicide, his estranged wife, in a Facebook post, accused San Luis Obispo County Supervisor Lynn Compton of helping to kill him.

Responding to a SLO New Times article about a new Oceano advisory council, Steve Lacki, a supporter of Compton’s political opponent Jimmy Paulding, posted several comments about the supervisor. The apparently sexist posts appear to have spurred others to make degrading claims, including Torres’ allegation that Compton assisted in Hill’s demise.

“She helped to kill my husband so she could have his spot, and here we sit,” Torres posted on June 11.

In 2020, Hill was the chair of the board of supervisors and Compton was vice-chair. Supervisors hold the chair position for one year, with the vice-chair filling in during the chair’s absences.

Following Hill’s death, county investigators determined he committed suicide through an overdose of cocaine and antidepressants.

After two years of marriage, Hill and Torres separated in the fall of 2016, according to court records. In early 2019, Hill filed for divorce.

Hill submitted a proposed judgment on Jan. 24, 2020, in order to finalize their legal split.

On March 11, the FBI raided Hill’s office at the county government center and his Shell Beach home. Shortly after the last agent left his home, Hill attempted to kill himself. First responders then transported Hill to Arroyo Grande Community Hospital.

Hill and Torres jointly signed a document, on March 16, asking the court to set aside the “default judgment” on their divorce, and giving Torres rights to Hill’s county retirement account.

Three months later, Hill checked into a residential mental health facility. At that time, Compton served as board chair. Hill returned to the board, acting as chair during the Aug. 3, 2020 board meeting.

Hill was found dead in his home three days later, Aug. 6, 2020, shortly after he learned his administrative assistant, who he had been dating, had accused him of sexual misconduct.

Torres did not respond to questions about her Facebook posts, which also include allegations the FBI raid was prompted by Hill winning the March election. Following two days of penning more than 50 posts on Facebook, Torres deleted her post on the SLO New Times page and limited access to her personal Facebook page.