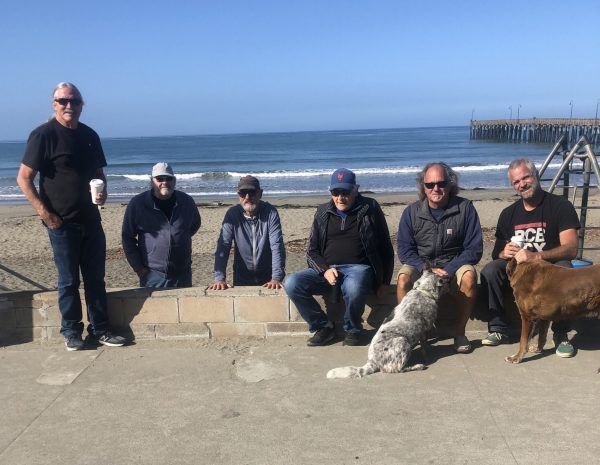 I was hanging out the other morning at the seawall off the pier with the usual suspects–and our dogs–when a very friendly lady and her dog and an older couple approached us, and she said, “Mom, Dad, this is the wall gang. They’re here just about every morning.”

Two of the dogs, Boomer and Wilbur, cuddled these people and sniffed at the gal’s small dog, while our other dog Zeke, fetched a ball.

Some of the wall gang were missing, but charter members like the professor, and the artist, the college coach, the still-employed carpenter, the Nam vet/old hippie/ex-long haul trucker/ex-mobile mechanic, and myself were present, and stood proud at being introduced in a manner indicating we were at least local celebrities in this tiny microcosm of America, where little of the chaos and acrimony takes place and situates us in a bubble of stability, well-being and near serenity.

We get to discuss the insanity of the country from a great protected distance, so it seems. In all, there’s probably around ten of us, but usually there’s five or six on any given morning.

A few youngsters, including the 24-year-old unique furniture builder, also show up along the wall and usually drink their health teas and nibble their organic stuff several yards away, but sometimes they join us.

The furniture builder has said, “I come down here because I love the beach in the morning. It’s quiet and calm and near deserted, and because you guys are here, there’s a spiritual aura about you that is the beach, that is what the beach has always been and means to me.”

What is true is that in almost every crevice of America–rural small town or big city–cafes and diners and coffee huts are habituated mornings by old guys like us, and in some cases their dogs, wasting a good hour and sometimes more rehashing the same old topics or commenting on the country’s demise or bellyaching about their sports teams or their hobbled joints and surgeries or discussing books and movies or just plain trying to get away from their wives for an hour or two, which I’m sure the wives welcome.

Only, those old geezers don’t share our view of the ocean and sky and surfers and frolicking dogs, the sounds of birds and waves, the pungent smells of sea life.

We are all males and at this point mostly declining of body and mind but still able to conjure up stories and experiences, because we have been around a long time and done a few things, and pretty much it’s about jokes on ourselves and nonsense, and very little boasting, and, hopefully, joyously, some new, really juicy gossip.

If any one of us denied loving gossip, he would be jeered.

The professor was born and raised here and knows everything about everybody. If there are myths about so and so, he easily dispels them. He relates outrageous stories of outrageous characters as far back as the 1950s and beyond, because his parents are from here.

Of course we talk about what Cayucos used to be—full of blue collar laborers and cowboys and fishermen and abalone divers driving dilapidated pickups and heaps—and the Tavern filling the now dead midnight hours with laughter and brawls.

They are all gone.

And how long any of us will last is up for grabs.

The young guys, and especially the furniture maven, ask questions about Cayucos and also what is going on in the country we are so isolated from.

“Go to your computer and find George Carlin on YouTube, and listen to him bludgeon you with bleak humor that is painfully true,” he is advised.

“Never heard of him.”

“Never heard of him?” says the still employable carpenter, tossing his Lab a stick on the beach.

“Never heard of George Carlin? In his day he was the funniest man alive and delivered the most scathing social commentary about America in the country.”

“People need to listen to him now,” somebody said.

“He’s gone now, so he doesn’t have to see that it’s worse. He missed out on Trump. He was already stunned by our national stupidity and cluelessness.

“And,” I said. “If you’re going to hang out here mornings, you need to read Steinbeck’s ‘Cannery Row’ and ‘Tortilla Flat,’ two books that glorify bums and ne’er do wells.”

This kid, who has traveled outside of the USA and is already pretty wise and wants to save the environment and improve quality of life for the masses, and seems to be doing a good job of savoring what is right, is one of the few youths who seem to appreciate and admire the wall gang.

Most young people pad or jog by us, cell phones to ears, surfboards in the grip, as if we’re invisible, failing to realize some of us have served in the military and combat, survived the sex, drugs and rock ‘n’ roll era, survived the assassinations of JFK, RFK, and Martin Luther King, survived the great recession and now the pandemic, survived heart attacks and cancer and wives and girlfriends who torment us with the silent treatment when we’re assholes, etc, etc, etc….

This kid gets it, I’m pretty sure. Or is he giving us lip service and hasn’t time for our suggestions? I wonder if he realizes that the wall gang might just be the last stand at the last outpost, and at some point nobody down here will know about George Carlin and Cannery Row, and nobody will care, and that’s when we’ll really be in deep shit.