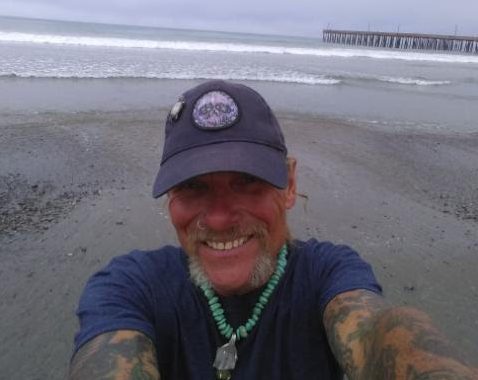 There is pleasure in reporting that “Happily Homeless Dave,” whom I wrote about early on in my byline for CalCoastNews, is no longer homeless.

When Dave first arrived in town, various forthright Cayucos crusaders were appalled and personally affronted by the sight of Dave’s rig (which he pedaled here from Texas) parked in spots along the seawall near Ruddell’s Smokehouse.

His unusual minimalist makeshift home was a tepee-shaped mini tent atop a canvas padding atop an elongated mountain bike, in which he slept, kept a modicum of apparel and edibles, and his silversmith tool kit.

Flying from the tent, on which were printed words thanking our military for their service, was an American flag.

The expertise created in this mini home withstood hard rains and brutal winds, keeping Dave dry and warm as he huddled in blankets.

Every morning, after coffee, Dave worked on art pieces and jewelry molded and bent to perfection from elements he scavenged on the beach—shells, driftwood, glass, fish bones, etc. At the Cayucos thrift store, he bought metal objects and shaped them into various sized fish sculptures and began selling his creations on weekends along the seawall.

Despite fighting off repeated harassment from locals and the police, it became obvious that Dave had begun to forge relationships with other locals who appreciated the fact he was never drunk, unkempt or offensive, but instead helpful and friendly and began early mornings picking up litter on the beach.

It also became apparent among locals and artists that Dave was an impressive artisan who deserved recognition.

It also became apparent that Dave, in his mid-50s, had not survived as he had by not being able to work hard, as well as skillfully.

He became a member of the local church and met people who put him to work as a handyman repairing or building on projects.

He began to accumulate more jobs and, along with the sale of his art, opened an account at the bank in Cayucos and occasionally gave money to various homeless people living in their vans.

In time he moved in with a roommate and tossed out his mini tent, gave away his bike, and bought an ancient rusted van and immediately went to work on it.

“My style is,” Dave said. “renovating my van with only scraps tossed away, by material no longer used by people who don’t need it. I build everything from scratch and hardly ever pay for anything.”

“I have saved a lot of money here in town by using throw away material for my art pieces. But it’s not about the money. I need the money to live on, yes, but I think it’s a lesson on how a man like myself can survive and do even better by using stuff nobody else wants, that costs little or nothing.”

He grinned. “The path I chose.”

The interior of Dave’s van is a masterpiece of economy, invention and imagination. He has created an ambiance that suits his taste and personality, an artist’s conception of an individualistic life style suited to his functional needs.

Every item in this van has been scavenged or cost a pittance.

A soft, inviting, cushioned gray chair was bought at a junkyard.

Beneath the bed in back are lacquered cabinets found on the side of the road with FREE signs on them.

Other cabinets are beneath a former headboard found in the trash.

A scavenged small table sanded down and darkened on the edges with the burnt letters of Cayucos on it, sits beside his chair.

“Things you find in trash bins and on the side of the road are unbelievable,” Dave said. “I always find them just when I need them the most, like it’s meant to be.”

The interior of the van (power for lights and cooking are run by a battery pack and solar panels) literally gleams with happiness at its rehabilitation. It reminds one of a comfy parlor or small den to sit and drink beer or wine and play music and visit with guests.

During Dave’s first year in town, when the crusaders were after him, he sold so much art along the seawall that word got out and people from as far away as West Virginia now contact him, send him silver and metal, and ask him to sculpt them a piece of art.

His artistry is now in demand. He wants to stay in Cayucos the rest of his life. During his travels he’s lived in many places, but something about Cayucos crept into his blood and forced him to do whatever it took to make his mark and plant his stake in the ground for the duration.

He now sleeps in a comfy bed and enjoys all the accommodations almost everybody living in Cayucos experiences. It’s my guess he appreciates these luxuries more than the multiplying multi-millionaires in town, who seem to need everything at whatever cost, usually to the excess.

“Well,” I said, “with the looks of your van, you could live quite comfortably in it compared to that bike rig—just in case.”

Ahhh, the glory of bottom-feeding.