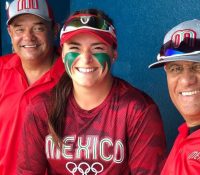 Hyland, who is from Visalia but has a grandfather who was born in Mexico, is set to become the first former Cal Poly softball player to appear in the Olympics. In Aug. 2019, Hyland pitched the final one-third of an inning to earn a save during Mexico’s 2-0 victory against Puerto Rico in the semifinal of the Softball Americas Olympic Qualifying Tournament.

“This summer has been a very humbling experience,” Hyland said following the Olympic qualifier. “We’re ready to show the world what we are made of next summer.”

Because of the coronavirus pandemic, the 2020 Olympic Games were delayed a year. As a sport, softball is a returning to the Olympics this year following a more than decade-long absence from the games.

In 2014 and 2017, Hyland was named both Big West pitcher of the year and Cal Poly female athlete of the year. Following her collegiate playing career, Hyland joined the Cal Poly softball staff as an assistant coach.

Hyland has considerable international softball experience, including being a gold medalist in the Central American Games.