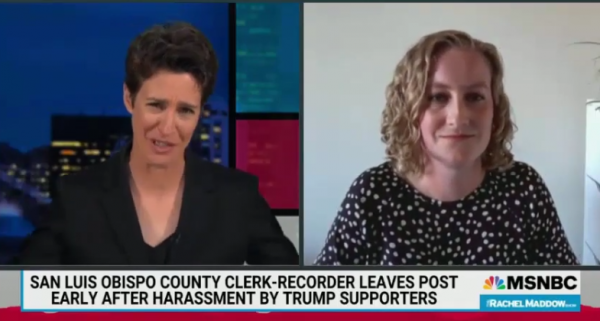 San Luis Obispo County’s clerk recorder Tommy Gong applied to be the Contra Costa County deputy county clerk recorder in March. He accepted the job before May 4 and announced his departure in June. His job change followed years of on-the-job mistakes and scandals attached to his family.

But media outlets, both local and national, turned Gong into a symbol of GOP outrage and the victim of race-baiting once he announced his departure. They cited a May 4 SLO County Board of Supervisors’ meeting.

In the public comment period, an attendee asked Gong if he was “a member of the Chinese Communist Party,” while other audience members questioned his refusal to provide certification and an audit of the county’s Dominion voting machines to the Republican Party of SLO County.

Gong’s announcement of his resignation prompted SLO County Supervisor Bruce Gibson to blame Gong’s departure on the May 4 meeting and on supervisors Debbie Arnold and Lynn Compton. Arnold and Compton did not condemn the racist comment or the barrage of public comments questioning Gong’s job performance, he said. A Tribune editorial repeated the claim.

Within weeks, national media began reporting that anti-Asian bias had run Gong, “who was great at his job,” out of town. Rachel Maddow said that after “months of enduring the attacks, he is leaving.”

“Here are Trump supporters, saying they need the board of supervisors to remove him because he must be a secret member of the Chinese Communist Party, because you know, just look at him,” Maddow said on her June 11 show. “Showered with abuse, threatened, run out of town on a proverbial rail, and so it is going all over the country.”

Maddow failed to mention there had been only one anti-Asian public comment during Gong’s six years in office.

Gong won his first SLO County election in Nov. 2014. During his tenure, Gong faced multiple challenges regarding his job performance and criminal misconduct by family members.

During the 2018 election, Gong’s office miscategorized one of the three seats on the Los Osos CSD Board, and sent incorrect ballots to several Arroyo Grande precincts.

In 2019, a San Luis Obispo judge sentenced Sherry Gong, Tommy Gong’s wife, to about six months in jail for embezzling more than $32,000 from the booster club of the Atascadero High School Band.

In 2020, a family member was accused of illegally videotaping minors.

Then, in the 2020 election, some voters in San Luis Obispo received multiple vote-by-mail ballots, while thousands of other voters in rural SLO County found themselves removed from the voter rolls.

Gong did not respond to multiple emails from CalCoastNews about the reason for his resignation.

Following the 2020 election, Randall Jordan, the chairman of the Republican Party of SLO County, sent Gong a letter noting there was concern “with the controversy surrounding Dominion voting machines,” but understood Gong was busy with the election.

“We assume you are fully engaged in other post-election tasks at this time and that these do not include alterations, updates or changes in this machine,” Jordan said in his Dec. 11 letter. “However, we would request that if anything of that sort is planned, you defer that action until we have had a chance to talk with you and get our questions addressed.”

On March 15, Jordon, Gong and several concerned county residents attended a Zoom meeting. Gong was asked for an audit of the county’s voter machines and documentation of its third-party certification. Gong declined, according to several emails between Gong and Jordan.

In April, Contra Costa County selected Gong as the top candidate for the job, but needed to conduct a background check before making a formal offer. In the weeks that followed, a SLO County official informed CalCoastNews that Gong was planning to take a job in Northern California.

On May 4, more than 100 callers voiced their concerns with either election integrity or voter suppression during the SLO County Board of Supervisor meeting, with the one public commenter delivering the racial attack on Gong.

Then on June 4, after a SLO county administrator asked Gong if rumors he had taken a job in another county were true, Gong announced his resignation.

The SLO County Board of Supervisors is now tasked with appointing a new clerk recorder to serve until Jan. 2023. At that time, the winner of the 2022 election will take the seat.

Even though Gong is no longer working in SLO County, the controversy continues.

After San Luis Obispo attorney Stew Jenkins applied for the county clerk recorder job, Gibson called him unqualified and requested that they appoint Deputy Clerk Helen Nolan to serve until the 2022 election.

Jenkins has decades of experience with election law and regulations. However, after Jenkins questioned the integrity of former SLO County supervisor Adam Hill, Gibson broke with Jenkins, his former supporter.

The SLO County Board of Supervisors is slated to discuss the appointment of a new clerk recorder at its July 13 meeting.