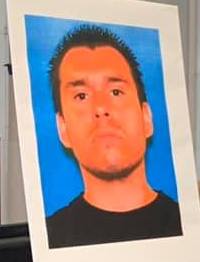 SWAT officers shot and killed Steven Adam Calderon, 32, when he lunged toward a gun he had placed on a porch at the end of a more than eight hour-long standoff, which included several exchanges of gunfire, Paso Robles Police Chief Ty Lewis said at a press conference on Tuesday.

Calderon, a Los Angeles man who also appeared to be living in Paso Robles at times, initiated each of the exchanges of gunfire that led up to the fatal shooting early Tuesday morning. Police did everything they could to get Calderon to surrender peacefully, but he refused to do so, Lewis said.

Nonetheless, two Paso Robles police officers and one San Luis Obispo police officer have been placed on administrative leave in the aftermath of the fatal shooting.

Shortly before 4 p.m. on Monday, a caller reported a man had fired gunshots from the balcony of an apartment during a domestic dispute. Calderon fired several shots from a pistol into the air, Lewis said. Additionally, Calderon allegedly pointed the gun at his girlfriend and threatened to shoot her.

The Los Angeles man then barricaded himself in an apartment at the Dry Creek complex near the 2400 block of Branch Creek Circle. At about 5:30 p.m., after Calderon pointed a firearm at officers, Lewis asked for assistance from the San Luis Obispo County Regional SWAT Team.

During the standoff, Calderon would come in and out of the home and yell various things at law enforcement personnel. Officers repeatedly yelled at Calderon, “Adam, come to the door. Adam, you need to come out with your empty hands raised. You need to come out and surrender.”

Instead of engaging in any kind of dialogue, Calderon emerged from the home several different times and fired several shots from a handgun at police officers and the SWAT team, Lewis said. Some of the shots hit a Bearcat, an armored vehicle that SWAT officers brought to the scene.

Officers deployed tear gas and different chemical agents inside the home to try to get Calderon out. He did not respond much to those efforts, Lewis said.

Then at about 1:15 a.m., Calderon emerged from the home, set his gun down on a porch and began discussing various topics with the SWAT officers. At one point, Calderon lunged toward the gun, and he was fatally struck by gunfire from the SWAT team, Lewis said.

No bystanders, nor police officers suffered injuries. Authorities evacuated most residents from neighboring apartments during the standoff.

“The message to the community is that none of the people at the Dry Creek apartments were injured,” Lewis said during the press conference. “None of our officers were injured, thank God, especially in the wake of the tragedy that occurred recently in San Luis Obispo. So the community is safe. Unfortunately, we also have Mr. Calderon that is deceased, and it’s not lost upon us that a mother and a father have lost their child.”

San Luis Obispo Police Chief Rick Scott spoke briefly during the press conference, saying the fatal shooting was a tragedy that will require a complex investigation, and he is thankful officers emerged uninjured.