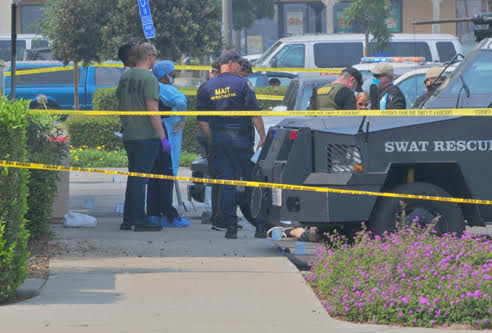 Law enforcement around the body of the Nipomo shooter, photo by Richard Bastian

In the span of a little more than a year, San Luis Obispo County has had five fatal officer-involved shootings.

Authorities shot and killed the suspect in each of the shootings. Collectively, the shootings also resulted in one officer being killed and five others suffering injuries.

Of the five deceased suspects, two were San Luis Obispo County residents, two did not live in SLO County and one was thought to be living in both Los Angeles and Paso Robles.

The first of the five fatal shootings occurred last June at the end of a manhunt that spanned more than a day. On June 10, 2020, Mason Lira, a 26-year-old transient who often lived in Monterey, ambushed the Paso Robles Police Department, firing shots at officers and leading staff to request backup. While two SLO County Sheriff’s deputies searched the downtown area, Lira shot Deputy Nicholas Dreyfus in the face. Lira then shot and killed a 59-year-old homeless man.

The next day, following several more gun battles with officers, Lira shot Arroyo Grande Police Sergeant Michael Smiley in the calf. As officers closed in on Lira, he shot CHP officer Tim Maxwell in the bulletproof vest. Lira then shot Kings County Sheriff’s Deputy Blake Bursiaga in the knees as the deputy dragged the injured CHP officer to safety. Lira tried to flee the riverbed heading toward Highway 101, but officers shot and killed him.

On Aug. 21, 2020, 42-year-old Scott Huffman of Bakersfield became involved in an argument with a woman in the Vons parking lot on Tefft Street in Nipomo. Huffman started shooting in the air as the woman drove away. After shooting multiple rounds at the Vons gas station exterior door, Huffman walked toward Tefft Street as he continued to fire multiple rounds toward businesses on the south side of Tefft Street.

Huffman shot multiple rounds at a Cal Fire firetruck that was traveling eastbound on Tefft Street responding to an unrelated call for service, hitting the passenger door multiple times. He then walked onto the center median of Tefft Street and pointed his handgun at motorists.

The Bakersfield man went inside the gas station and shot three rounds, while employees locked themselves in an office. He then exited the building and a shootout with law enforcement ensued. Officers shot and killed Huffman during the gun battle.

On Sept. 24, 2020, Christopher Straub of Templeton, who had belonged to the Sick Boyz, a North County gang, and had an outstanding warrant, fled by foot from deputies who attempted to detain him. Straub, 38, ran through a vineyard to Templeton Cemetery, hid and then ambushed deputies, firing multiple rounds from a handgun and striking Deputy Richard “Ted” Lehnhoff once in the leg.

Shortly afterwards, Straub tried to return to his vehicle, which contained loaded firearms. A gun battle ensued, during which deputies shot and killed Straub.

On May 10, 2021, six officers attempted to serve a search warrant at the San Luis Obispo apartment of burglary suspect Edward Giron, 37. Officers knocked and announced they were there, but Giron did not open the door. After an extended amount of time, officers broke down the door to find Giron armed and lying in wait. Giron fired at the officers, who returned fire and retreated.

Then earlier this week, Paso Robles police and regional SWAT officers engaged in a more than eight-hour standoff with Steven Adam Calderon, 32. Calderon, who appeared to be living in both Los Angeles and Paso Robles, barricaded himself in an apartment at the Dry Creek complex after allegedly firing a pistol in the air and threatening to shoot his girlfriend.

During the standoff, Calderon emerged from the home multiple times and fired several shots from his handgun at police officers and the SWAT team. Some of the shots hit a Bearcat, an armored vehicle that SWAT officers brought to the scene.

Officers deployed tear gas and different chemical agents inside the home to try to get Calderon out. Calderon refused to surrender.

At about 1:15 a.m. Tuesday, Calderon emerged from the home, set his gun down on a porch and began discussing various topics with SWAT officers. At one point, Calderon lunged toward the gun, and he was fatally struck by gunfire from the SWAT team, Paso Robles Police Chief Ty Lewis said.