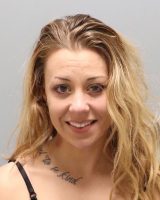 A Paso Robles woman was sentenced to nine years in prison on Wednesday for attempting to murder a teen with a pocket knife. [Tribune]

On Jan. 14, 2020, Michaela Twyman, 25, stabbed a then-16-year-old boy in the neck in a trailer parked in the Woodland Plaza parking lot. She then fled the scene.

Paramedics transported the teen to Sierra Vista Regional Medical Center in San Luis Obispo, where he underwent surgery. The teen suffered serious injuries, but he survived.

Last month, Twyman pleaded no contest to charges of attempted murder and assault with a deadly weapon.

On Wednesday, a judge sentenced Twyman to five years in prison for attempted murder, plus four years in enhancements for causing great bodily injury and using a deadly weapon. The judge also gave Twyman a four-year sentence for assault with a deadly weapon, but ruled it will run concurrently with the Paso Robles woman’s sentence for attempted murder.

Paul Greco, Twyman’ attorney, said his client was suffering from mental health problems at the time of the stabbing.