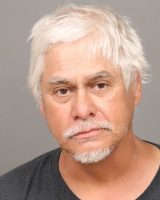 After starting a fight at Mission Plaza in San Luis Obispo on Wednesday, a man allegedly attempted to stab a person who tried to break up the altercation and then punched the individual who intervened in the face.

Charles Alvidrez, 58, started a fight with another man at Mission Plaza at about 5:45 p.m., which two city residents attempted to stop, according to the San Luis Obispo Police Department. But, Alvidrez pulled out a pocketknife and tried unsuccessfully to stab one of the residents.

Alvidrez then turned and punched the same individual in the face, according to police.

The man with whom Alvidrez initially started the fight left the area before police arrived. Officers arrested Alvidrez for assault with a deadly weapon, drunk in public and resisting an officer and booked him in the SLO County Jail, where he remains in custody with his bail set at $100,000.