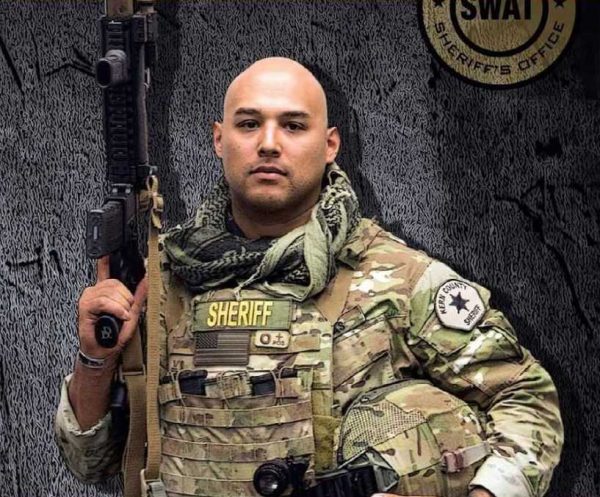 The gunman, a 41-year-old man, shot his sons, 24 and 17, and their mother, 42, at about 1 p.m. on Sunday. Two women and two girls managed to escape the house unharmed, Kings County Sheriff Donny Youngblood said at a press conference on Monday.

Kern County Sheriff’s deputies arrived at the scene, and shortly afterwards, the gunman opened fire from inside the home. The deputies took cover and requested backup, including the SWAT team.

The gunman shot Deputy Phillip Campas, 35, as well as a second deputy. Campas and the other deputy were taken to the hospital. Campas succumbed to his injuries, while the other survived.

An additional two SWAT officers were wounded by shrapnel. They remained at the scene and continued to take part in the SWAT team efforts.

The standoff continued, and at certain points, the gunman fired from the house at the SWAT team.

At 6:28 p.m., the gunman exited the house armed with an AK-47 and a handgun and climbed on the roof of a home. Officers shot the suspect.

The gunman was taken down from the roof and pronounced dead at the scene. At the time of the deadly shootout, he had a restraining order that prohibited him from possessing firearms.

Deputy Campas was a five-year veteran of the Kern County Sheriff’s Office and a marine veteran who served as a sergeant in Afghanistan. Sheriff Youngblood said Campas was a star in the sheriff’s office.

“He probably touched this organization as much as anyone that I’ve ever seen in such a short period of time,” Youngblood said.