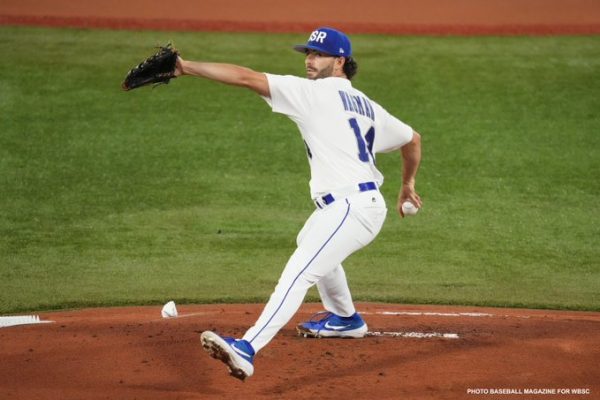 Former Cal Poly All-American pitcher Joey Wagman competed in the Olympics Friday, starting for Team Israel against his native United States in an opening round baseball game won by the United States.

Wagman pitched a scoreless first inning and a scoreless second inning, and he retired seven of the first eight batters he faced. But with two outs in the third inning, Wagman gave up a run-scoring double to Team USA second baseman Eddy Alvarez and a two-run home run to designated hitter Tyler Austin.

He came out of the game after the third inning. Team USA went on to defeat Team Israel 8-1, with Wagman suffering the loss.

Over the three innings Wagman pitched, the former Mustang gave up three runs on four hits while striking out five batters and walking none.

Following Friday’s contest at Yokohama BSB Stadium in Japan, Team USA is 1-0 in Olympic play and Team Israel is 0-2. Team Israel will play in the knockout stage on Sunday or Monday.

An All-American in his senior year at Cal Poly, Wagman recorded a school record 13 wins in 2013, including the Mustangs’ first-ever NCAA Division 1 baseball tournament victory. After leaving Cal Poly, Wagman pitched in Minor League Baseball between 2013 and 2017. He has since pitched in independent leagues in the United States, as well as for a team in Prague, Czech Republic. Additionally, Wagman has pitched in multiple international tournaments for Team Israel, including the 2017 World Baseball Classic.