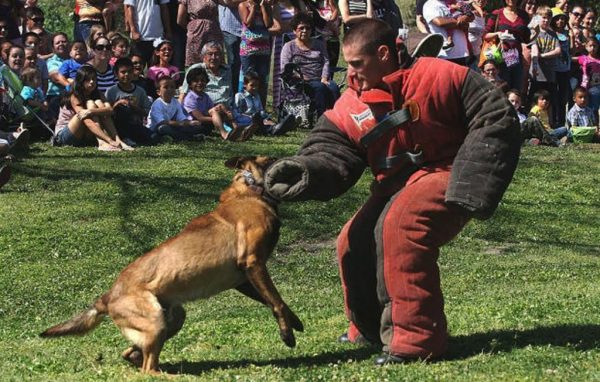 A San Luis Obispo jury on Thursday awarded more than $20 million to the elderly woman injured and the family of a man killed in a 2016 Grover Beach dog attack.

On Dec. 12, 2016, the dogs belonging to then-Grover Beach officer Alex Geiger chewed through a fence, broke loose and attacked a 64-year-old man and an 85-year-old woman. The man, David Fear, died shortly after the attack, while the elderly woman, Betty Long, Long survived, despite suffering a fractured skull, broken pelvis, shattered shoulder and dog bites to her torso.

The dog that was determined to be the more aggressive animal was a Belgian Malinois that had been trained as a K-9 and served in the Exeter Police Department with Geiger. Authorities euthanized the Belgian Malinois following the attack.

In Aug. 2014, the Exeter Police Department hired Geiger to serve as an officer. After just one year on the force, the department assigned Geiger a K-9 trained to attack. Neo reportedly had some training and behavioral issues while serving as a police dog in the Central Valley.

Geiger left Exeter to join the Grover Beach police force in Sept. 2016. That month, Geiger purchased the Belgian Malinois from the city of Exeter for $5,287.50. Geiger then brought Neo to Grover Beach as a personal pet.

Long, now 90, has endured persisting shoulder injuries, and she suffered a stroke that an expert witness testified was attributed to the attack.

In 2019, a criminal jury found Geiger not guilty of two felony counts alleging he did not maintain control of his retired police dog and one felony count of manslaughter.

Separately, Geiger settled for an undisclosed amount as the case played out in civil court. Initially, the city of Grover Beach was named in a lawsuit filed by attorneys Jacqueline Vitti Frederick and Sunny Hawks, but it was removed from the case in the years leading up to the trial.

Following a nearly month-long trial, the civil jury found the Exeter Police Department did not properly train Geiger how to safely secure his retired police dog. The retired K-9 was not supposed to be treated like a pet. Rather, it was supposed to be kenneled anytime Geiger was not around.

Jurors found former Exeter Police Chief Clifton Bush and Lieutenant Brett Inglehart were negligent in how they trained Geiger to care for his retired K-9. The jury also found Geiger to share some responsibility for the attack.

The jury unanimously decided to award all of the money sought by the plaintiffs. Jurors awarded $13.8 million to Long and $7 million to Fear’s family.