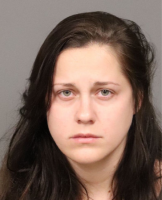 A judge on Thursday dismissed a murder charge for the second time in the case of a San Luis Obispo woman who shot her husband at point-blank range.

On July 16, 2020, Skylar Marshall shot her 35-year-old husband, Alexander Hagist, inside their unit at the Peachwood Apartments on Chorro Street. Hagist suffered a single gunshot wound to the head and later succumbed to his injuries.

Marshall and Hagist had been married for about a year prior to the husband’s death.

At the conclusion of a preliminary hearing in April, San Luis Obispo County Superior Judge Jesse Marino said it was an incredible stretch for prosecutors to have charged Marshall with murder, an offense that involves malice and intent. Marino said Marshall’s actions were obviously reckless, but evidence presented indicated Marshall had a reasonable expectation that the gun was not loaded.

Marino ordered the prosecution to file a new complaint for felony involuntary manslaughter. However, prosecutors refiled a murder charge.

On Thursday, Judge Michael Duffy ruled in agreement with Marino, again dismissing the murder charge against Marshall. Now, the prosecution can again choose between refiling a murder charge or charging Marshall with involuntary manslaughter.

During the preliminary hearing in April, four detectives testified Marshall and Hagist were messing around with a newly purchased pistol on a living room couch after Hagist retrieved it from a bedroom.

Marshall told investigators she though the firearm was unloaded. Marshall put the barrel of the gun to her husband’s forehead, and when he stared back at her without any reaction, she pulled the trigger, the woman said.

Police Sgt. Caleb Kemp testified he examined the apartment after the shooting and saw Hagist sitting on the living room couch with a gunshot wound to the middle of his forehead and that the shot was fired from close range.

Marshall, who was crying and hyperventilating in disbelief, told Kemp the couple was playing with the gun, and she did not know it was loaded. Marshall appeared genuinely concerned about Hagist’s fate, Kemp said.

While being interviewed at the police station a couple hours after the shooting, Marshall told Sgt. Evan Stradley, in the weeks since purchasing the gun, they would sometimes jokingly point it at each other.

Eventually, Marshall admitted the couple had a slight disagreement while Hagist had the gun out, and she picked up the firearm and pointed it at his forehead, Stradley testified.