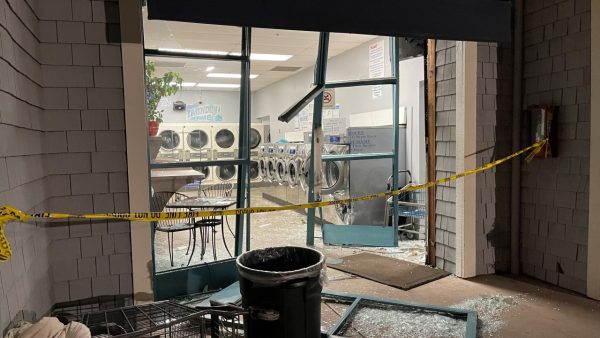 A 51-year-old man allegedly attempted to kill an acquaintance by slamming his truck into the victim on Friday evening in Santa Barbara. Upon impact, the victim was thrown through glass windows of a laundromat, but he survived the attack.

Patrick M. Tobin was driving a pickup truck in the 300 block of Meigs Road when he spotted an adversary standing in front of Mesa Laundromat, according to the Santa Barbara Police Department.

Tobin allegedly drove his pickup truck toward the victim, striking him and propelling the man about 20 feet through the glass windows of the laundromat. Tobin then reversed out of the destroyed business front and fled the scene, according to police.

Witnesses observed the incident and chased after Tobin’s truck on foot. Tobin pulled his truck into the parking lot of an adjacent restaurant, where the witnesses confronted him.

Tobin then drove toward one of the good Samaritans, but his truck struck a large concrete pillar. Firefighters arrived at the scene and assisted the witnesses with detaining Tobin until police officers arrived.

Officers booked Tobin in the Santa Barbara County Jail on felony charges of attempted murder and assault with a deadly weapon, in lieu of $500,000 bail.