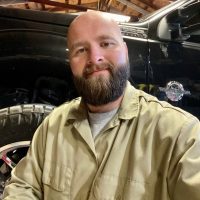 The CHP has identified Glenn Howard Owens as the 72-year-old Atascadero man killed by a person driving under the influence of drugs in rural Avila Beach on Friday.

Shortly before 3 p.m., 31-year-old Patrick McDuffee of Nipomo was driving a pickup truck southbound on San Luis Bay Drive when he allegedly crossed into the northbound lane. McDuffee then crashed head-on into a Mercedes van near Apple Orchard Lane.

Owens, who was driving the van, died at the scene of the crash. Owens’ wife, 65-year-old Susan Margaret Owens, suffered major injuries and was transported to Sierra Vista Regional Medical Center.

A CHP investigation determined McDuffee was driving under the influence of drugs. Officers arrested McDuffee on charges of murder and DUI.

McDuffee remains in San Luis Obispo County Jail where he is being held without bail, according to the sheriff’s office website.