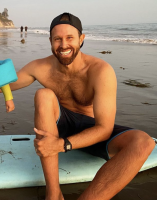 Correction: The children were a 2-year-old boy and a 10-month-old girl, according to the U.S. Department of Justice.

The owner of a Santa Barbara surf school allegedly brought his two children, ages 2 and 10 months, to Baja California, Mexico over the weekend and later stabbed them to death.

Matthew Taylor Coleman had been staying with his 2-year-old boy and 10-month-old girl at Hotel City Express in Rosarito, Mexico. Then early Monday morning, Coleman brought his children to Rancho El Descanso, south of Rosarito, where he stabbed them 17 and 12 times respectively, according to the Baja California Attorney General’s Office.

Coleman allegedly used a wooden stake to kill his children.

Customs and Border Protection officers arrested Coleman as he tried to cross into the United States from Mexico at the San Ysidro Port of Entry in San Diego.

Coleman, along with his wife, founded Lovewater Surf School in Santa Barbara, according to the business’s website. The couple and their children are pictured on the surf school site. A few months ago, Coleman posted a photo on Instagram of himself with his wife and children with the caption, “My treasures!”

Coleman’s wife reported her husband and children missing on Sunday, according to the Santa Barbara Police Department. At the time, they had been missing for about 24 hours, and Coleman’s wife was concerned about their wellbeing, police said.

Santa Barbara police are assisting the FBI with the double murder investigation. Border patrol agents and Mexican authorities are also involved in the case.