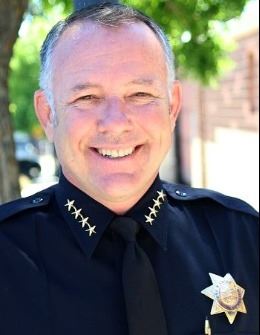 Lewis has served as Paso Robles Police Chief for the past three years and has been a member of the city’s force for 20 years. Council members chose Lewis to become city manager following a months-long, nationwide search for an executive to fill the position.

“We spoke to a number of quality individuals and at the end of the day, we decided that Ty best fit the organization’s needs,” Mayor Steve Martin said in a statement. “He has shown his leadership and communication skills, his knowledge of the unique challenges and attributes of Paso Robles, he analyzes information to make decisions and most importantly, he has a strong desire to serve Paso Robles to the best of his ability.”

Last November, then-Paso Robles City Manager Tom Frutchey announced he would retire in February. But, Frutchey remained on the job until April at the request of the council.

With the search for Frutchey’s replacement taking longer than expected, the council hired Greg Carpenter as Paso Robles’s interim city manager. The search for a full-time city manager involved Paso Robles community members and city executives, as well as a consulting firm.

Lewis said in a statement that he is honored and humbled to have been asked to become city manager.

“I have spent my entire career in public service, 20 of those years here in Paso Robles,” Lewis said. “We have many economic, social, and political challenges facing our community and I feel privileged that I have been asked to help lead and guide our community into the future. I thank the city council and the community for their trust. I look forward to the opportunity to work with the 250 women and men of our organization who help make this city unlike any other!”

City officials credit Lewis with leading the community through a multi-day active shooter event and challenges related to the pandemic; increasing the number of sworn police officers, dispatchers and support personnel to all-time highs; and providing safety during civil unrest and protests while also respecting community members’ diversity, equity and inclusion concerns.

Earlier this year, Lewis encountered controversy after community members attached a pro-law enforcement “thin blue line flag” to a light post outside the Paso Robles Public Safety Center. After a resident complained that the flag was controversial and divisive, Lewis ordered that it be taken down. His decision drew rebuke from many community members who argued the flag display had been a show of support for law enforcement. Some residents thanked Lewis for removing the flag.

Lewis began his career in law enforcement by serving six years with the Porterville and Bakersfield police departments. He went on to serve in every rank of the Paso Robles Police Department. In addition to experience in law enforcement, Lewis holds a bachelor of science in business management from the University of Phoenix and a master of science in administration from Cal State Bakersfield.

The council is scheduled to formally appoint Lewis at its meeting next Tuesday. Lewis is expected to begin work as city manager on Aug. 23. He will receive an annual salary of $221,000.