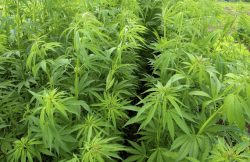 Following backlash over proposing a cannabis farm next to a new high school campus in Santa Maria, the grower announced it has withdrawn its permit application for the project. [KSBY]

Stateside Greens had been seeking to plant at least 20 acres of cannabis on a property close to a new agricultural and technical education campus in Santa Maria. Project plans called for a 40-acre outdoor marijuana cultivation area, which would include a 20-acre canopy under hoop structures spread across 38 acres. The applicant also planned to have a 100-square-foot processing area.

The project site was located next to the Santa Maria Joint Union High School District’s recently opened Agricultural Education and Career Technical Education Centers, a campus shared by students from the four schools in the district. District officials opposed the proposed cannabis grow and said they were working with their legal counsel to submit a letter of opposition to the Santa Barbara County Planning and Development Department.

In turn, Stateside Greens withdrew its permit application for the marijuana grow. The company, though, says it still seeks to develop a cannabis project in the area.

“My intention was never to create issues for the community, but rather create a positive footprint in the cannabis industry by bringing a good project forward, creating jobs and doing this the right way,” Stateside Greens CEO Michael Salman said in a statement. “After almost a year’s effort to create a great project and now that the school district administration has made clear to the media their extreme displeasure at the possibility of being our neighbor, I have decided to withdraw the project. I am still in pursuit of bringing a positive cannabis project to the community and will continue that effort.”