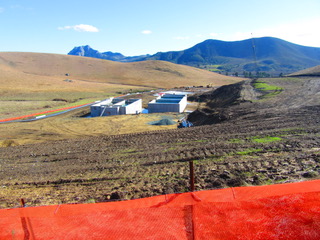 Writer’s Note: This is part three of a story, told in installments, about the corruption involved in Morro Bay’s water reclamation facility. Part one is about Morro Bay City Council’s bait-and-switch.

Figuring out what’s going on with the City of Morro Bay is like peeling an onion, one layer at a time, looking at a series of actions separately to connect the dots.

So far, we’ve looked at how the council members pulled off a bait and switch during the 2018 rate increase process — how they told ratepayers that they would raise rates to “replace” and “rebuild” the existing sewer plant and then contracted a month later to build a sewer plant with over twice the capacity to process sewage as what we have now.

The public record also shows that the city council members withheld information on the actual treatment capacity they contracted to build and lied about the size of the plant. See the first two reports.

Now let’s look at how it happened that there is no coastal development permit (CDP) for this project.

There are two reasons for this situation stemming from actions by the Morro Bay City Council and the California Coastal Commission.

The first reason that there is no CDP for the project is a direct consequence of lying about the size of the treatment plant.

The city council told agencies including the U.S. Environmental Protection Agency in the low interest loan agreement and the Coastal Commission that they were building “0.97 million gallons per day (MGD) WRF.”

The city council used this 0.97 number — which is the average volume of sewage the city produces a day — as a description of the project and did not disclose the actual design capacity of the infrastructure to process sewage.

The consequences of this deception were direct and foreseeable:

1. The coastal commission issued the city a coastal development permit for “construction of a new a 0.97 million-gallon-a-day average daily flow…” sewage treatment facility.

2. The city is building a sewage treatment facility with two headworks that can process a total of 16.28 million gallons of sewage a day.

3. There is no permit for construction of the treatment plant that the city is building.

4. This construction is illegal because development in the coastal zone without a coastal development permit is not allowed and government agencies are not exempt from Coastal Act requirements.

The legality of spending public money on an unpermitted, illegal public works project is another story.

Second, the coastal development permit that was issued is “void” because the coastal commission did not have the authority to vote on it at the July 11, 2019 permit hearing.

Two state laws set the rule that the coastal commission’s legal authority to vote on a permit application is triggered by the distribution of the project plans.

Until the plans for a project have been given to them at the hearing, the coastal commissioners do not have the legal authority to vote on the permit application. There is no way to know whether a project is legal without the plans.

This is what the commissioners did. They voted without the plans — consequently without authority — to approve the permit application.

See for yourself. Page 1 of the coastal development permit that was issued to the city names the project elements that were permitted: Subdivision of land for facility, construction of wastewater treatment/ reclamation facility, construction of sewage pipelines and lift/pump stations, construction of underground recycled water injection wells, maintenance of and modifications to the existing ocean outfall, operation of the new water reclamation facility and overall system and related components, decommissioning and demolition of the existing wastewater treatment plant and restoration of all affected areas.

Then check out the exhibits that were attached to the July 11, 2019 staff report for the coastal commissioners. Click on Exhibit 3 “Plans” to see that plans for the eight project elements that were permitted were not included in the staff report and were not distributed. The commissioners voted to approve the city’s permit application anyway.

When a government agency like the California Coastal Commission votes without the legal authority to do so, that vote is “void” —  it never happened because the agency didn’t have the power to do it, and the vote has no legal effect. The coastal commission has been to court before for taking action without authority. Here’s a quote from one lawsuit.

“… if the Commission takes action that is inconsistent with, or that simply is not authorized by, the Coastal Act, then its action is void.”

There was no legal approval of Morro Bay’s permit application and consequently no legal coastal development permit.

So, because the city lied about the size of the project there is no coastal development permit for the project they are actually building. And because the commission voted to approve the permit application for a nonexistent project without the legal authority to do so the vote was void, and the permit — for a project that isn’t being built — could not be legally issued.

The coastal commission’s permit hearing was the only hearing for this project and there were no plans disclosed. The plans for the project elements listed above have never been disclosed or discussed or approved at any public meeting by any land use agency. It’s pretty simple how the city and coastal commission pulled this off but it’s another story.

And it’s important to keep in mind that there are no general plan use permits for either the treatment facility or the pipelines. The city never applied for them and the county and the city’s planning department let it slide.

Meanwhile, the city council is spending millions of dollars of public funds on an unpermitted major public works project.

What a mess. Or, as Sir Walter Scott put it “Oh what a tangled web we weave, when first we practice to deceive.”