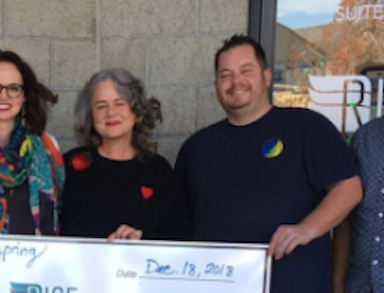 Harmon plans to take a position as a statewide climate policy advocate. It is unclear whether or not Harmon intends to vacate her mayoral seat before her term ends in late 2022.

Dayspring, who was arraigned in federal court Wednesday on bribery and tax evasion charges, has agreed to plead guilty to both felony offenses, pay $3.4 million in restitution to the IRS and cooperate in the government’s ongoing corruption investigation.

Harmon was allegedly a regular guest at Dayspring’s Grover Beach pot dispensary, hanging out in the upstairs offices, one of Dayspring’s business partners told CalCoastNews. During one of her visits, Dayspring allegedly ordered staff to give Harmon two bags containing approximately $1,000 worth of complimentary marijuana products.

Around the time Harmon allegedly received complimentary marijuana from Dayspring, the mayor was among eight politicians for whom the cannabis mogul and his dispensary, Natural Healing Center, hosted a covert fundraiser. Harmon failed to disclose the non-monetary contribution, as required by state law.

Weeks later, following, the Nov. 2018 election, Harmon voted for a resolution establishing criteria for city staff to rank marijuana shop applicants. The resolution created a point system that appeared to favor applicants, particularly Dayspring, who had donated money to Harmon, as well as councilwomen Carlyn Christianson and Erica Stewart. Dayspring ended up securing one of three coveted pot shop permits from the city.

Harmon will hold a press conference at City Hall at 4 p.m. Thursday to announce her career change.