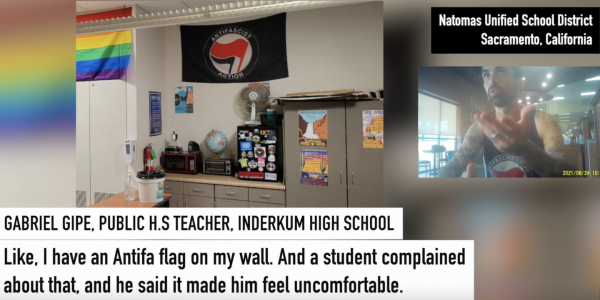 A California high school teacher who openly supported the Antifa movement, and incentivized his students to participate in some of its activism, has been placed on administrative leave and will be fired, according to the district he works for.

Gabriel Gipe taught advanced placement government at Inderkum High School in Sacramento, part of the Natomas Unified School District. Gipe became thrust into the local and national spotlight after Project Veritas, a conservative advocacy journalism group, recently published a video in which an undercover reporter spoke with teacher about his views and approach to teaching.

“I have 180 days to turn them into revolutionaries,” Gipe said about his students during the video.

The AP government teacher said he accomplishes that by “scaring the f*ck out of them.”

On his classroom wall, Gipe had an Antifa flag and a Mao Zedong poster. He also used stamps with images of Josef Stalin, Fidel Castro, Kim Jong Un and others to mark students’ work as complete, according to the Natomas Unified School District.

Gipe posts a calendar every week with political events connected to the Antifa movement and other activist circles that students can get extra credit for attending, he said in the Project Veritas video. The teacher has had students show up for protests, community events, tabling and food distribution. Students must go to the events, take photos and then write a reflection in order to receive extra credit, Gipe said.

Additionally, the government teacher requires students to take an ideology quiz revealing where they lie on a political spectrum. Then, students must give Gipe photos of themselves, and the teacher places them on a class wall, aligned left to right based on political views, he said.

“Every year, they get further and further left,” Gipe said.

Gipe also said there are three other teachers in his school department who are on the same page as him.

Following the release of the Project Veritas video, Natomas Unified officials conducted an investigation into the practices of Gipe. Officials found Gipe violated district guidelines in several ways, Superintendent Chris Evans stated in a letter to the school district community.

One such guideline states, “You may not use the authority of an office or employment to encourage or discourage political activity by any other person.”

In his letter, Evans acknowledged some students supported Gipe’s conduct, while others did not.

“There are a number of students and former students that are expressing support for the teacher on social media,” Evans wrote. “By taking the extra time, we have also been able to listen to students who have shared discomfort about his shared politics. Some students have shared that the teacher has stated he believes students will move to the left as a result of his class. That is unacceptable. Students are the ones caught in the middle of this. To those who have felt uncomfortable at any time in the past 3 years, we apologize.”