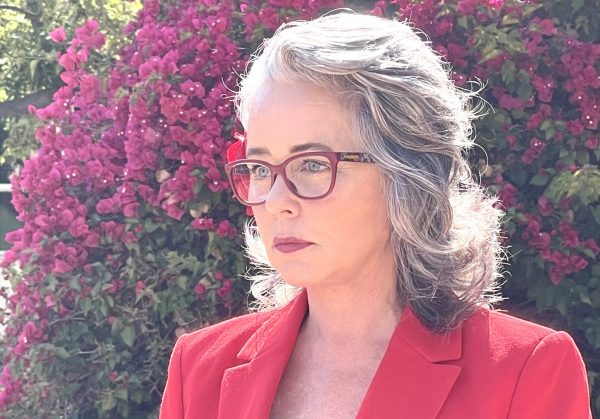 Departing San Luis Obispo Mayor Heidi Harmon suggested in an Instagram comment on Friday that she may again block social media users with whom she disagrees, this time doing so once she is out of office.

On Friday morning, Harmon posted an excerpt from a New York Times column supporting California Gov. Gavin Newsom’s bid to defeat the recall effort he is facing on Instagram. Harmon prefaced the excerpt by stating, “Posting this even though I know it brings out every hater on earth but I’m willing to take that because that’s just how important this race is.”

One commenter then suggested the possibility of Harmon disabling comments on her Instagram account. Harmon replied by saying, upon leaving office in 24 days, she can block comments in order to have more constructive dialogue.

“That would be wonderful but because I’m an elected official I’m not legally allowed to do that even though they’re terrible and mostly have nothing to do with local policy,” Harmon wrote in her reply. “The good news is there’s only 24 days to go and then I can block them all and we can have a more constructive dialogue about what actually matters!”

Commenters responded by criticizing Harmon’s suppression of speech and questioning the mayor about her ties to recently indited marijuana mogul Helios Dayspring. 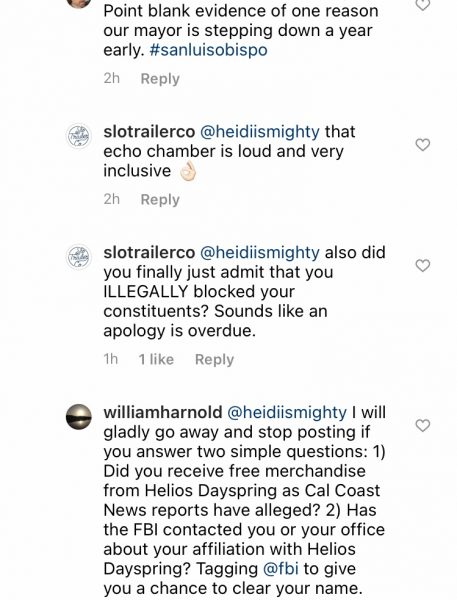 Earlier this year, Harmon faced allegations she violated freedom of speech regulations by blocking people with contrasting views from her social media pages. After receiving a public records request asking for a list of everyone she had blocked from her social media accounts, Harmon acknowledged she blocked at least 25 Instagram users and 58 Facebook users. It appeared, however, the list of blocked users Harmon provided was incomplete.

Harmon left social media and returned multiple times in the aftermath of receiving the records request. In April, the SLO City Council adopted a social media policy that calls for public officials to avoid deleting comments or blocking users on official pages or sites they maintain.

Last week, amid allegations she took gifts from a marijuana businessman, Harmon announced she is stepping down as mayor to take a nonprofit job in which she will advocate for policies to combat climate change.