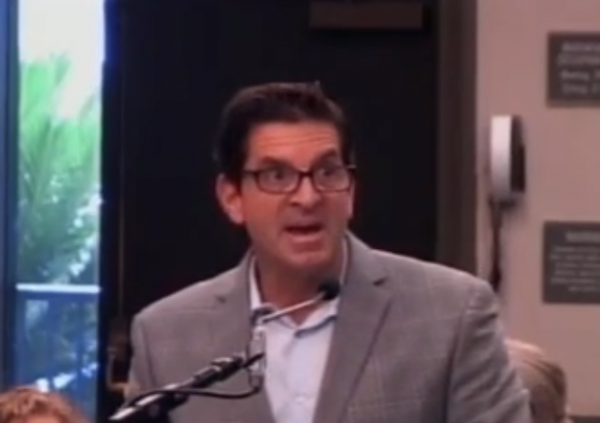 “My name is Charles Grace … .” Please watch the video. You decide if Charles Grace is the San Simeon Community Services District general manager.

District board chair Gwen Kellas, the other directors, district counsel, and Charles Grace himself continue to refuse to answer that question. They are unwilling to disclose the answer. In my opinion, something seriously shady and illegal is and has been taking place in our district.

As you see, on Oct. 12, 2018, at a full California Coastal Commission meeting, Charles Grace is recorded on video introducing himself and leading a major presentation related to San Simeon. Upon completion of his portion of the presentation he introduces Supervisor Bruce Gibson.

This is largest issue to ever face San Simeon being the relocation of its wastewater treatment facility and potentially involving millions in fines. Supervisor Gibson is now our witness along with District Counsel Natalie Frye Laacke and Jeff Oliveira of Oliveira Environmental Consulting (not to mention the twelve commissioners who were also present).

Were they all duped like the rest of us for years or what?

At 1:28 into the meeting, Grace begins and leads the district’s presentation stating the following: “My name is Charles Grace. I am the General Manager of San Simeon Community Services District …”

Now you can see and hear him officially state in his owns words that he is “the San Simeon Community Services District general manager.”

The directors, district counsel, and Charles Grace were all shown this video during public comments at the beginning of Sept. 9 board meeting. They still refused repeated challenges to answer the question, “Is Charles Grace the San Simeon CSD general manager?”

At the end of the meeting, they had a closed session for an employee performance review of what is now called “General Manager Services”. Of course, no reportable actions and no answers.

To have something like this occur in our county or anywhere in the state seems unbelievable. The law requires the board of a CSD to appoint a general manager to be an operative CSD. As residents we have nowhere to turn.

Our entire community is being gamed. The integrity of the community services district structure of local government is being challenged.

This is a huge breach of public trust.

Hank Krzciuk, “The Directors, District Counsel, and Charles Grace were all shown this video during public comments at the September 9th Board meeting. They still refused to answer the question, ‘Is Charles Grace the San Simeon CSD General Manager?” “

Michael Donahue, “Charles Grace is the San Simeon General Manager as he and the SSCSD website have for years proclaimed. For years, Charlie Grace as General Manager has been paying his own company Grace Environmental Services simply by entering items and dollar amounts in the SSCSD disbursement journal which the SSCSD Board Directors almost always pay including as recently as August 2021. Now that the SLO county District Attorney, the SLO county Grand Jury, the California state Fair Political Practices Commission and the State Water Resources Control Board are looking into Grace Environmental Services management irregularities and conflict of interest the SSCSD Board directors are suddenly tight lipped about confirming that Charles Grace is the San Simeon General Manager.”

Karina Tiwana, “I think the Board Members know what’s up and will continue to play the game I. Spite of obvious admissions in a formal setting by the admitted SSCSD General Manager. The Directors need to explain their position to the public. It’s not OK anymore and it never was. Answer the question truthfully.”

Karina Tiwana, “Play the Game is a nice way to say Lie and cover-up to protect a public official from felony prosecution and they know it. Why must San Simeon residents stand for this?”

kukka Le, “Let’s see if ‘someone’ will dismiss this video as ‘disinformation’. :)”

Fred Glienna, “His title, which he referenced, seems fairly clear.”

Karina Tiwana, “That makes him an admitted public official…if I was a juror. But I’m just a dumb San Simeon resident that deserves to be fooled by my representatives. Let them eat cake …and I like chocolate but didn’t even get cake! Boo!”