A neighbor of Ruben Flores denied seeing anyone under his Arroyo Grande home on Feb. 9, 2020, calling the allegations she viewed digging, shovels and a wheelbarrow “untrue.”

Ruben Flores’ son Paul Flores is accused of murdering Kristin Smart during an attempted rape in 1996. Charged with accessory after the fact, Ruben Flores is suspected of helping his son dispose of Smart’s body, which prosecutors believe was buried under a deck at his home.

Shortly after the April 13 arrests of Paul and Rubin Flores, Smart family attorney James Murphy filed an emotional distress lawsuit against Ruben Flores, and told the media that neighbors had witnessed Ruben Flores, Susan Flores and her boyfriend Mike McConville working under Rubin Flores’ home at 710 White Court in Arroyo Grande. Murphy called it “compelling evidence” they had moved Kristin Smart’s body to another location just a few days after deputies searched the home. 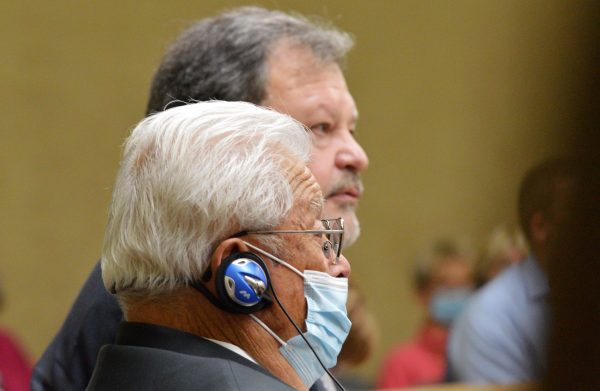 The last witness on Monday, Jamilyn Holman testified she contacted “Your Own Backyard” podcast creator Chris Lambert after seeing Ruben Flores, Susan Flores and McConville having trouble backing a trailer down Ruben Flores’ driveway on Feb. 9, 2020. The trailer was then pulled up along the side of the home near where prosecutors say Smart was buried.

The next morning when Holman left for work, the SUV and the trailer were still at Ruben Flores’ home, Holman testified.

Holman later met with Lambert and Murphy at Murphy’s office to tell her story, which did not include the later reports that she saw people under the home, she testified.

The prosecution then rested its case and the defense decided not to call witnesses following Holman’s testimony.

“Based on that, we are not going to submit more evidence,” said Robert Sanger, one of Paul Flores’ attorneys.

In his closing argument, Deputy District Attorney Chris Peuvrelle went over evidence presented during the hearing, including Jennifer Hudson who testified she heard Paul Flores admit to killing Smart at a party in 1996, human blood found in a filled-in hole under Ruben Flores’ porch and cadaver dogs alerting to Paul Flores’ dorm room in 1996.

Peuvrelle then focused on the numerous lies Paul Flores told investigators in the weeks following Smart’s disappearance. Paul Flores allegedly lied about how he got a black eye, not having any contact with Smart at the party, Smart not having trouble walking and not forcing a kiss on anyone the night Smart disappeared.

In his closing, defense attorney Sanger blamed “Your Own Backyard” podcast, the media and billboards for promoting Paul Flores guilt without sufficient evidence.

Sanger demeaned Hudson’s reputation, calling the witness who said she heard Paul Flores admit to the crime a “troubled person.” Sanger said Hudson was only able to remember facts after reminders from Lambert.

“The whole thing about the black eye doesn’t prove anything,” Sanger said. “This is a case that should not go any further.”

Ruben Flores’ attorney Harold Mesick argued the prosecution had not met their burden, and that it appeared Paul Flores was being accused of murder because he was the last person who saw Kristin Smart alive. He then noted the $500,000 this case has cost the Flores family.

“Witnesses are here to do whatever it takes to help the prosecution not tell the truth,” Mesick said. “There will be a lot of people who will be unhappy if Paul Flores is not hung from the highest gallows.”

Court is set to resume Wednesday, when the judge will determine if Paul Flores should be put on trial for murder and if his father should go on trial for helping his son dispose of Smart’s body.