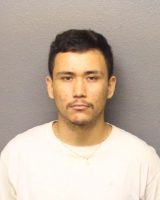 A gunman shot a person during a dispute in Santa Maria Saturday night, then fled and initiated an hours-long standoff with police before his arrest.

Prior to the shooting, at about 11 p.m., a 911 caller reported a man threatening another man with a gun at a home in the 500 block of W. Taft  Street. As officers arrived in the area and approached the scene, a shot was fired in their direction, according to the Santa Maria Police Department.

Officers saw a man with a gun run away from the scene. Upon hearing additional gunshots, officers evacuated nearby homes and secured the area.

Santa Maria Police sent out an emergency alert at about midnight.

A police SWAT team joined the search, along with K-9s. Following a lengthy search, officers located the suspect, 20-year-old Jose Manuel Ramirez Magos. Ramirez Magos then barricaded himself inside a home in the 500 block of W. Polk Street.

An initial investigation indicates, during the dispute, Ramirez Magos shot the victim at least twice. The victim suffered non-life threatening injuries. He was treated at a local hospital and released.