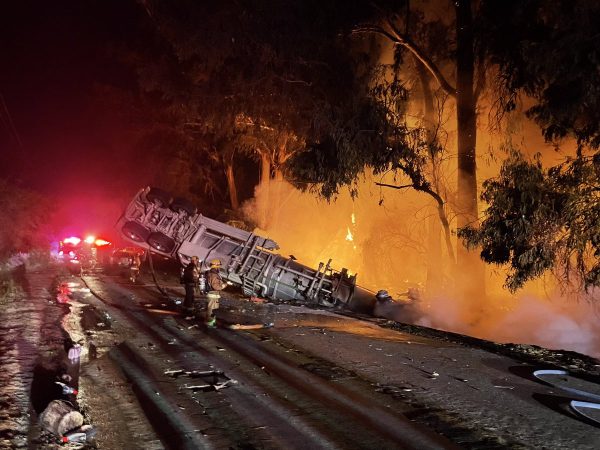 A crude oil tanker crashed east of Orcutt early Monday morning, sparking a fire in a eucalyptus grove. It is unclear if any oil spilled as a result of the crash.

A truck and a small vehicle crashed at the site of a fallen tree at about 4:30 a.m. near the intersection of Old Dominion and Orcutt Garey roads. Following impact, the oil tanker overturned and its cab burst into flames, according to the Santa Barbara County Fire Department.

Flames spread from the truck into the eucalyptus grove and burned about one quarter of an acre of vegetation. The fire did not extend into the trailer carrying the oil, the fire department stated in a tweet.

When firefighters arrived at the scene, they found the truck’s cab fully engulfed in flames. Firefighters extinguished the tanker fire and have been knocking down the vegetation blaze.

One driver involved in the crash suffered minor injuries and was transported to the hospital. Cleanup of the area will begin once firefighters have the situation under control.