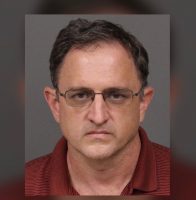 A former Atascadero teacher who took upskirt photos and videos of young female students agreed to a plea deal that could result in a three-year prison sentence, a punishment prosecutors argue is too short. [Tribune]

Chris Lynn Berdoll, 52, worked as a sixth grade teacher at the Atascadero Fine Arts Academy. During the first two weeks of the 2018 school year, Berdoll at least seven times used his phone or tablet to record the backsides, legs and crotches of female students in his sixth grade class, according to a Title IX report. At times, Berdoll touched the girls’ bodies or clothing while recording them.

Berdoll would ask girls to help him straighten up his classroom and to have lunch with him. While alone with the students, Berdoll would upskirt the girls and have students pose or model for him, according to a lawsuit filed in civil court.

Berdoll was placed on paid administrative leave on Aug. 31, 2018. He was then arrested two weeks later. Berdoll resigned from his position on Sept. 27, 2018.

Investigators ultimately accused Berdoll of committing crimes against 14 female students between Sept. 2017 and Aug. 2018. Prosecutors charged Berdoll with a combined total of 44 counts of possession and production of child pornography.

On Tuesday, Berdoll pleaded no contest to 24 felony counts of using a minor for a sex act and one felony charge of possession of child pornography. Judge Jesse Marino then recommended a three-year sentence. The maximum sentence Berdoll could have received for the charges is 19 years, said Deputy District Attorney Danielle Baker.

Prosecutors had sought a seven-year sentence for Berdoll. Baker criticized the sentence proposed by Marino, arguing the terms of the plea agreement were reached by Berdoll’s attorney and the judge, rather than by the defense and the prosecution.

Some representatives of victims in the case also criticized the proposed sentenced, arguing it should have been longer.

Marino said the SLO County Probation Department will conduct a review of the case and issue a sentencing recommendation. After the probation department review, Marino could possibly increase the length of the sentence, though Berdoll would then have the option to withdraw his plea and advance the case toward trial.

Berdoll’s sentencing is scheduled for Dec. 16 in Marino’s courtroom.