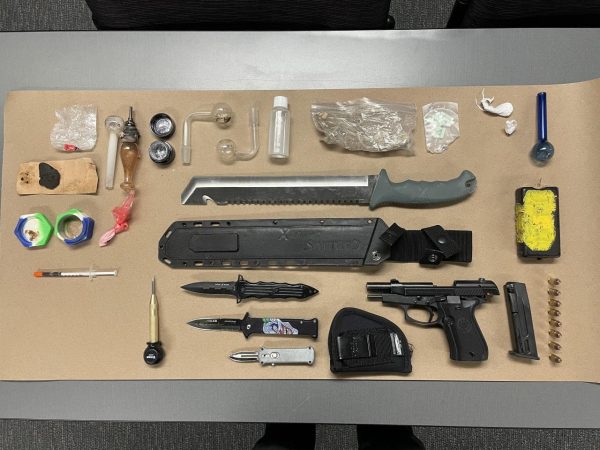 San Luis Obispo police officers arrested four people after discovering a loaded handgun and drugs in a car they searched near Cal Poly on Halloween.

After spotting a traffic violation, an officer pulled over a car with four people inside near the intersection of Foothill Boulevard and Casa Street. During a search of the vehicle, officers found various amounts of methamphetamine, heroin, fentanyl, psilocybin mushrooms, prescription pills, drug paraphernalia and a loaded handgun.

An investigation revealed the handgun had recently been stolen from a residence in SLO County.

Officers arrested the four suspects and booked them in the San Luis Obispo County Jail on various charges.

Joshua Reynolds, 28, of San Luis Obispo is charged with possession of a controlled substance and possession of drug paraphernalia. He is no longer in custody.

Kristi Crites, 52, of San Luis Obispo is charged with possession of a controlled substance and possession of drug paraphernalia. She is no longer in custody.

Jessica Dana, 28, of Grover Beach is charged with possession of a controlled substance, possession of drug paraphernalia, and felony and misdemeanor warrants. She remains in jail in lieu of $100,000 bail.