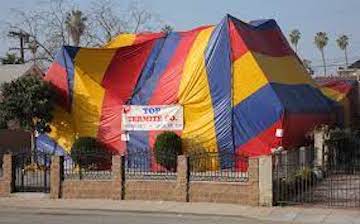 Burglars in recent months have targeted homes in Arroyo Grande and Grover Beach that are being fumigated, resulting in some residents losing valuable belongings. [KSBY]

On Oct. 29, a camera inside a Grover Beach home caught a burglar turning on lights and rummaging around the house. The burglar stole several valuable items, according to the victims.

A crew working for Central Coast Termites discovered the break-in. When the crew arrived to take down the tarps covering the home, they discovered the burglar had busted open the door.

On Sunday night, a burglar or burglars broke into an Arroyo Grande home that was being fumigated. The suspect or suspects went into the second floor of the home and stole jewelry and a computer. A jewelry box and bolt cutters were left on the sidewalk after the break-in.

Jim Fortelny, the owner of Leadership Fumigation, said he is aware of eight break-ins during fumigations over the last few months. Fortelny urges clients to remove all valuables from their homes prior to fumigation.

Arroyo Grande and Grove Beach police say they are aware of the situation and are investigating.