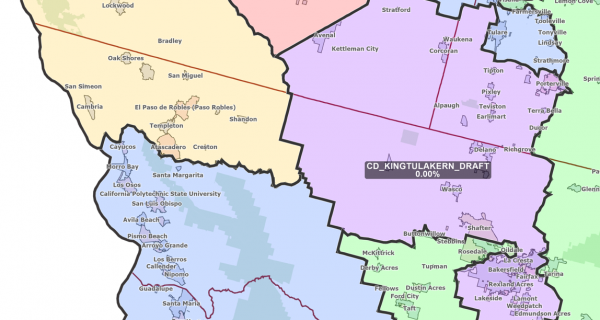 The South Coast district is tan. Below it, the Mid Coast District is blue.

The draft map drawn by the redistricting commission places southern and central San Luis Obispo County in a congressional district with Santa Barbara County and northern Ventura County, while moving most of northern SLO County into a district with Monterey and Santa Cruz counties.

The proposed “South Coast” district would stretch from the city of Ventura in the south to include Cayucos and Santa Margarita at the north end. The commission has not yet numbered the proposed districts.

California’s Citizens Redistricting Commission is presently tasked with drawing new district boundaries as the state is losing a congressional seat for the first time ever. Now that the commission has produced draft maps for congressional and other districts, a public review period is underway. The commission must submit the final maps to state elections officials by the end of the year.