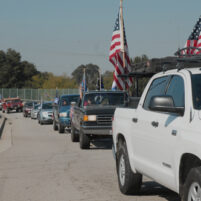 A man who allegedly caused a three-car collision last November by driving a vehicle into a Trump caravan in Santa Maria is set to stand trial for two felony charges.

On Nov. 8, 2020, a group of supporters of then-President Donald Trump held a “stop the steal” vehicle parade that went through Templeton, Atascadero, the Five Cities and Santa Maria. In the Northern Santa Barbara County city, Jacob Elieth Garza, 21, began following the caravan in his own car, throwing a water bottle and yelling at participants, according to the Santa Maria Police Department.

Shortly after 2 p.m., Garza sped south on Speed Street, ran a stop sign at East Stowell Road, crossed through the Trump caravan and slammed into a vehicle driving through the intersection, police said. The vehicle Garza struck then collided with a third car and rolled onto its side.

Two individuals, who were inside the car Garza struck, suffered injuries. One suffered a broken arm, and the other sustained extensive bruising.

Following the three-vehicle crash, Garza tried to flee the scene, but bystanders held him down until officers arrived. Video footage shows one man with his arm around Garza’s neck and other individuals holding him down, as well.

In April, prosecutors charged Garza with felony reckless driving and felony battery causing serious bodily injury. Prosecutors also charged him with two misdemeanor counts for throwing something at a vehicle.

Recently, a Santa Maria judge ruled enough evidence exists for Garza to stand trial for the two felonies, but not the misdemeanor charges.

In the aftermath of the collision, Garza launched a GoFundMe for himself, proclaiming he was the victim of a hate crime committed by Trump supporters.

“I was targeted and attacked in the midst of a Trump rally for simply being gay,” Garza wrote on the GoFundMe page. “I was followed and harassed which ultimately led to a multi-car accident while trying to escape. I was dragged, degraded and assaulted until police arrived on the scene.”

Garza requested donations for legal fees and medical expenses. The GoFundMe has raised $4,100.

In a separate case, Garza can also be tried for a felony grand theft charge stemming from him allegedly stealing more than $1,100 worth of items while he worked for Victoria’s Secret in Santa Maria. Previously, Garza was charged with two misdemeanor counts of driving or taking a vehicle without consent, as well as petty theft.