Writer’s Note: This is part seven of a story, told in seven installments, about the corruption involved in Morro Bay’s water reclamation facility. Part one is about Morro Bay City Council’s bait-and-switch.

Since my earlier reports about the lack of permits for the City of Morro Bay’s wastewater treatment plant, the city continues construction of the facility at the north end of South Bay Boulevard. The city’s evasion of required grading and use permits from the county has led to landslides and soil runoff into Morro Bay National Estuary’s watershed.

These photos were taken Oct. 25, 2021, just after dawn at the treatment plant construction site. The photo on the right shows the runoff from the site headed for the stream that flows into the Morro Bay National Estuary within about a mile. The estuary is already threatened by sedimentation. 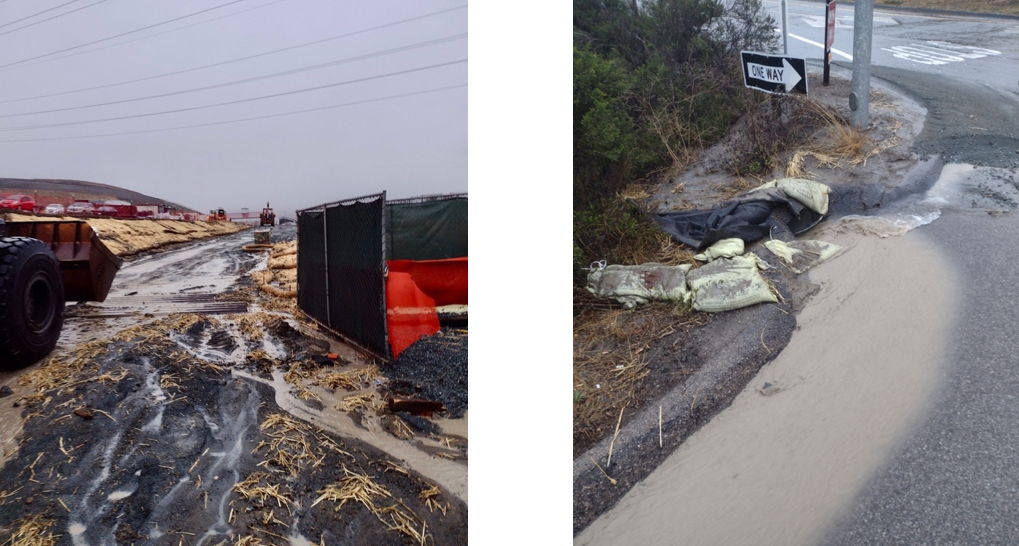 In order to build this project on this site in spite of its proximity of the estuary and the known instability of the ground, the Morro Bay City Council members illegally evaded the county’s permitting process altogether and approved an Environmental Impact Report (EIR) that illegally left the estuary out completely — as if permitting and the estuary didn’t exist.

In the beginning, city staff knew they had to get a general plan use permit from the county, and then started the application process. But, somewhere along the way someone decided to skip it and the county and the California Coastal Commission went along with it.

In an attempt to bolster the fiction that the city was not required to get a general plan use permit and a grading permit, former City Attorney Joseph Panonne and County Attorney Jon Ansolabehere cited a Shasta County court case for the idea that the city is exempt from the county’s land use laws.

In an email message Mr. Ansolabehere claimed that, “The county doesn’t have any land use or building code permitting authority, plain and simple” and the “City of Morro Bay is immune from the county’s building and zoning codes for its wastewater treatment project.”

In effect, Mr. Ansolabehere claims that the city is exempt from having to get county use and grading permits for this project because the exemption established by this Shasta County court preempts the County’s Coastal Zone Land Use Ordinance. But it doesn’t.

The court-made exemption is not a law that was passed by the state Legislature. The Shasta County court only implied that it existed. It doesn’t strip the county of its authority over land use in its territorial jurisdiction and doesn’t make the City of Morro Bay immune to the county’s land use laws.

The site for Morro Bay’s sewage treatment plant is in the coastal zone and the California Coastal Commission has certified the County’s Local Coastal Program including the Coastal Zone Land Use Ordinance to carry out the Coastal Act in San Luis Obispo County. The county’s ordinance implements state law. Not to be preempted as claimed by Mr. Panonne and Mr. Ansolabehere.

And the reality is that the Coastal Act and the County’s Coastal Zone Land Use Ordinance make it perfectly clear that government agencies are included in the definition of “person” and are — just like any other developer — subject to Coastal Act and County Ordinance mandates. They must apply for and obtain required permits.

Where exemptions exist they are clearly listed in the county’s ordinance and an exemption from land use laws for government agencies that want to build public works projects in the county’s unincorporated area is not one of them.

In fact, SLO County’s Local Coastal Program and Coastal Zone Land Use Ordinance have special use permit requirements for public works projects, public utility facilities, and projects in geologic study areas — areas at high risk of landslides — all of which apply in this case and all of which were evaded.

Wastewater treatment plants are public utility facilities under the county’s coastal framework for planning (search for wastewater) for which a development plan is required.

And public utility facilities are “special uses” which means there are extra standards and permit processes that are required in order to avoid “creating unanticipated problems or hazards.” Which is exactly what happened here. Two landslides on the site triggered by unpermitted grading pose imminent serious threats to public safety and to the Morro Bay National Estuary into which all runoff from the site will flow.

The project required a grading plan under the county’s ordinance because it involved more than 50 cubic yards of earth-moving (over 100,000 cubic yards) and an approved grading permit was required before grading could begin.

Because the site is a geologic study area due to high landslide risk potential, the project was required to have a geology and soils report submitted with the use permit application that was to be filed with the state geologist. Special standards are applied to development in areas “where geologic and soil conditions could present new developments and their users with potential hazards to life and property.”

All of these laws were knowingly violated — as if they did not exist — and as a result, the grading and construction proceeded and continues  based on engineering plans for which land use and grading permits do not exist.

How could correct engineering for the grading and construction of this project have been designed without the information and data needed and required for permitting public works projects, public utility facilities, and projects in areas with high risk of landslides?

How is protection of the public health and safety and the National Estuary possible when this project on this site was engineered and is being constructed without the essential geotechnical and environmental data and information that was required to have been produced for permitting the Project — but was not?

And why didn’t the Morro Bay and county attorneys inform the City Council members and the Board of Supervisors of the mandated permitting processes in the Coastal Act and in the county’s own Coastal Zone Land Use Ordinance?