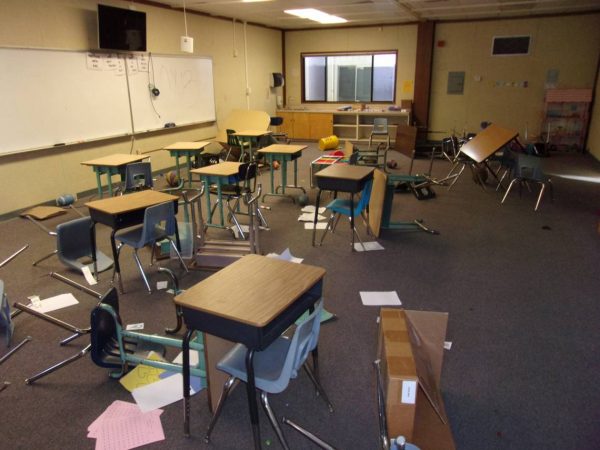 Sheriff’s deputies are searching for a vandal or vandals who trashed two classrooms, destroying a television, computer and more, at Oceano Elementary School over the weekend. [Tribune]

The suspect or suspects broke into a second grade classroom and a classroom used by the Bright Futures after-school program sometime between Friday afternoon and early Monday morning. The vandalism may be gang related because gang logos were written on classroom whiteboards, San Luis Obispo County Sheriff’s spokesman Tony Cipolla said.

On Monday morning, second grade teacher Ayslyn Leslie found her computer hanging by a cord off her desk. The television in her classroom was also destroyed, but other valuables, including a camera, were left untouched.

Desks were overturned in both of the classrooms. Also, one classroom was coated with retardant from a fire extinguisher.

The vandal or vandals caused about $7,000 worth of damage.

Oceano Elementary Principal Michelle Johnson said damage like this is unusual, and the school is a safe place for students. School officials and sheriff’s personnel are reviewing campus security footage.