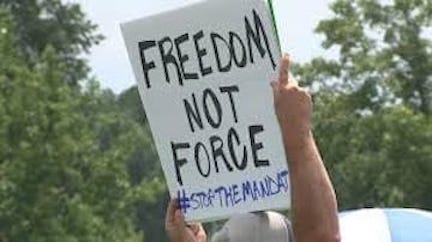 For the second time in the span of a month, at least hundreds of San Luis Obispo County students did not show up to class on Monday in connection to a statewide protest over Gov. Gavin Newsom’s COVID-19 vaccine mandate for schools.

Many parents pulled their children out of SLO County schools, while other students seized the opportunity to ditch class. Some students who ditched class did not show up to school at all. Others attended class in the morning and then left campus.

At Atascadero High School, attendance levels were relatively normal during first and second periods, students said. By third period, about 25 to 50 percent of students were gone.

Gov. Newsom’s mandate requiring the vaccine in order for children to attend schools in-person takes effect first for seventh through 12th grade students after the vaccine s fully authorized. It will later apply to kindergarten through sixth grade students.