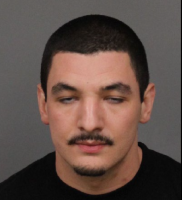 Paso Robles police captured a suspect in a recent armed robbery after he allegedly carjacking a vehicle on Sunday evening, leading to his arrest Monday morning.

At about 8 p.m. on Sunday, 29-year-old Richard Garcia approached a vehicle in the 1200 block of Creston Road with his hand on his right side, implying he was armed, police said. Garcia demanded the victim get out of their vehicle.

Fearing Garcia was armed, the victim complied. Garcia then got in the car and drove away, police said.

On Monday morning, the victim called 911 and reported spotting the carjacker walking on Creston Road.

Paso Robles officers located Garcia, who then fled by foot. But, a short time later, officers took Garcia into custody.

Officers booked Garcia in the San Luis Obispo County Jail on charges of resisting arrest, possession of methamphetamine, felony carjacking and felony vehicle theft, with his bail set at $500,000.

Last week, Garcia was named a person of interest in an armed robbery that followed an attempted robbery.

On Nov. 24, an armed man attempted to rob Carl’s Jr. on Black Oak Drive on the north side of Paso Robles. The suspect fled the restaurant without getting any cash.

Three hours later, a robber fired a shot into a wall behind a clerk at the Chevron gas station on Ramada Drive. He then fled with an unreported amount of cash in a BMW.

Shortly afterwards, an officer located a BMW matching the description of the getaway vehicle on the north side of Paso Robles. Deputies and officers pursued the vehicle all the way to the Lake Nacimiento Dam, where the suspect jumped from his vehicle and fled on foot towards the lake.

Shortly afterwards, investigators announced Garcia was a person of interest in the second robbery. Investigators do not yet know if the two robberies are connected.

Police are asking anyone who has information about these incidents to call the Paso Robles Police Department at (805) 237-6464 or Crime Stoppers at (805) 549-STOP.